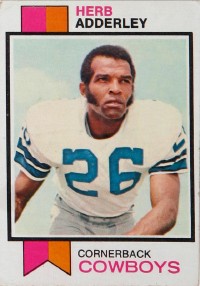 When Herb Adderley reported to his first Green Bay Packers training camp in 1961, he had the unenviable task of competing against future Hall of Fame running backs Jim Taylor and Paul Hornung for a starter's spot.

Hampered by a pre-season injury and inexperience, the Michigan State star had to settle for a spot on the special teams unit.

Then, on Thanksgiving Day in a game in Detroit, starting cornerback Hank Gremminger was injured. Coach Vince Lombardi decided to insert a by-then healthy Adderley as an emergency replacement.

Using his speed and marvelous instincts, Adderley quickly demonstrated that he had what it took to be an NFL cornerback. He even made the first of his 48 career interceptions that day.

Lombardi later admitted that he almost made a mistake with Adderley. "I was too stubborn to switch him to defense until I had to," he said. "Now when I think of what Adderley means to our defense, it scares me to think of how I almost mishandled him."

Adderley (born 1939) went on to play cornerback for nine seasons with the Packers and for three more with the Dallas Cowboys. During that time, he was selected to five consecutive Pro Bowls and was named all-league five times.

In addition to outstanding play on defense, Adderley was also a terrific kickoff return specialist, particularly during his years with the Packers. In 1962, he returned a kickoff 103 yards for a touchdown. In 1963, he brought one back 98 yards for another score.

Without doubt, Adderley benefited from the supporting cast of players he had in both Green Bay and Dallas. Six of Herb's defensive teammates -- four with the Packers and two with the Cowboys -- joined him as members of the Hall of Fame.

Proud of his accomplishments, Adderley once remarked, "I always wanted people who watched me play to say when they left ­the stadium, 'He's the best cornerback I've ever seen.'" Few would argue.