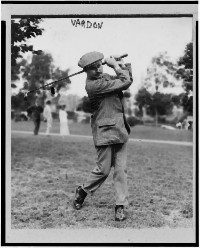 Harry Vardon, the "father of the modern golf swing," traveled far and wide as a golf ambassador. See more pictures of famous golfers.

In 1900, Harry Vardon, a 30-year-old Englishman born on the Isle of Jersey, played an extensive exhibition tour of the United States.

It was meant to promote interest in what was still a very new game to the United States, while at the same time publicize a new golf ball, the Vardon Flyer, made by the A. G. Spalding Co.

Vardon was chosen because he was the best golfer in the world. The year before, Vardon had won his third British Open (he would win six Opens, a record to this day).

The choice of Vardon served the purpose of inspiring people to take up the game because of his smooth and elegant swing.

Vardon, who was sometimes referred to as "The Greyhound," is considered the "father of the modern golf swing." He was the first to make a science of the swing, working out mechanics that everyone could understand and try to emulate.

He did not in fact invent the golf grip named after him -- in which the little finger of the lower hand on the club overlaps the index finger of the opposite hand -- but he is certainly responsible for its dissemination.

The Vardon Grip, which Vardon said best unified the hands for a more consistent swing, is to this day used by the majority of the world's golfers. Vardon was also known for his accuracy, which he allied with considerable power, but it was the latter that his first American audiences admired most.

Vardon recalled in a book about his first trip to America: "At that period, the Americans were not sufficiently advanced [in golf] to appreciate the finer points of the game. They did, however, appear to thoroughly enjoy the type of ball I drove. I hit it high for carry, which resembled a home run."

For his 1900 tour of the United States, Vardon traveled over 20,000 miles, going as far west as Chicago and throughout the Southeastern states. Except for a break to return home to defend his British Open title (he finished second), his 1900 tour extended through most of the year.

At each stop, he played the "best ball" of the two best players in the town, or a top professional in a singles contest. He lost only 13 out of 65 best-ball matches and dropped only one singles match. In grand fashion, Vardon won the 1900 U.S. Open (even though he whiffed at a one-inch putt on the final hole). Vardon prevailed by two strokes and outdistanced the nearest American professional, David Ball, by 10 shots.

The 1900 tour has rightfully been credited with creating the first significant interest in golf in the United States.

Vardon would return again to the United States, in 1913, for another exhibition tour. With this trip, he was again a factor in arousing interest in golf by Americans, but this time because he lost a competition.

That year, Vardon (and his compatriot, Ted Ray) were defeated in a playoff for the U.S. Open by a young, unknown American amateur named Francis Ouimet. Had Ouimet beaten someone of less repute than Vardon (and Ray), his victory would hardly have gotten the acclaim it did -- acclaim that spurred one of the biggest booms in American golf annals.

Vardon, along with his brothers, got into golf as a caddie. He played his first golf at the age of eight when he, his brothers, and other young boys built a course of their own. (Most of the holes were in the 50-yard-long range.) He made his own clubs -- the heads of oak, the faces covered with strips of tin, the shafts of blackthorn branches. The "balls" were marbles.

In 1896, the 26-year-old Vardon won his first British Open title, defeating defending champion J. H. Taylor by four strokes in a 36-hole playoff. Vardon remained at the top of the game for the next 25 years. Much of his competitive record has been lost, but it is known that at one point he had won 14 straight tournaments in Great Britain.

Putting wasn't Vardon's strong suit. "I think I know as well as anybody how not to do it," he once said. However, Vardon's accuracy is the stuff of legend. It was said that if he played the same course in the afternoon that he played that morning, the second time around he hit out of his morning divots. Perhaps not, but such stories usually have some basis in fact.

Whatever the case, Vardon was an exceptionally straight shooter -- in manner as well as with his golf clubs. He was a taciturn man, soft-spoken but trenchant when the moment arose.

A young Bobby Jones was paired with Vardon in a qualifying round for the 1920 U.S. Open. And after Jones topped a simple pitch shot, he asked Vardon, "Did you ever see a worse shot in your life?" To which Vardon answered, simply and honestly, "No."