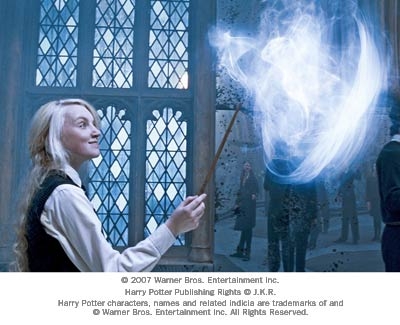 Witch-in-training Luna Lovegood uses her wand to attempt to summon a Patronus.

For witches and wizards living in the U.K., buying a wand used to be easy. All you had to do was go to Ollivanders in Diagon Alley, London. Mr. Ollivander's bewitched measuring tape would measure you from every angle, and the proprietor would use his skills and intuition to select the best wands for you to try. The choice of which wand to buy wouldn't be up to you, though -- it would be up to the wand.

Unfortunately, Mr. Ollivander has vanished. N­aturally, it's become a lot harder to buy a new wand, but there's a far more sinister side to Mr. Ollivander's disappearance. The Ollivander family has more than 2,000 years of wand-making experience, and Mr. Ollivander is widely regarded as the world's best wand maker. As such, he may be the only person who can help Lord Voldemort overcome a particular problem in his attempt for world domination. His wand will not work properly when fighting Harry Potter's.

People who have been following Harry Potter's saga probably know precisely why this happens. But for those who don't know Harry's history, it can be helpful to have a little background information about wands in general, Harry's wand in particular and how the two wands' incompatibility may affect the course of the war.

Wands are essential to almost all magic, but there are some notable exceptions. For example, animagi, or wizards who can change themselves into animals, can do so without their wands. The same is true for metamorphmagi, or wizards who can change their appearance. Most witches and wizards can cast some spells without using their wands, and very powerful wizards, like Albus Dumbledore, can sometimes perform great magical feats without them.

But to do good magic, you need a wand, and once you have a wand, it can be a versatile tool. In spite of Severus Snape's implications to the contrary, using a wand is a required step in most potion recipes. A wand can also remove strands of human memory and transfer them to a memory-storage device known as a Pensieve. With the lumos spell, a wand can become a flashlight. With the right wand movement and incantation, a wizard can do simple spells, like fetching distant objects (accio), or spells that require powerful magic, like summoning a protective Patronus (Expecto Patronum). Experienced wizards can also use their wands to perform spells without saying incantations aloud.

A wand's ability to do all this comes from the way it interacts with the witch or wizard who carries it. Next, we'll look at exactly what happens and at the different varieties of wands.

In the wizarding world, each magic wand is made from wood and has a magical core. Those made by Mr. Ollivander have one of three cores: dragon heartstring, unicorn tail hair or phoenix feather. Since different magical creatures live in different parts of the world, other wand makers sometimes use different core materials, such as veela hair. Mr. Ollivander classifies wands by four criteria. Three describe its physical makeup, including length, type of wood and core material. The fourth, which describes how the wand moves and bends, is more subjective.

Finding a wand that works for a particular witch or wizard is largely a process of trial and error. However, elements used in the wand often reflect its owner's traits. For example, the types of wood used in the wands belonging to Harry Potter, Hermione Granger and Ron Weasley correspond to the trees associated with periods of the Celtic year. It's a little like a horoscope -- each character's birthday falls within a certain period, which corresponds to a specific tree. Harry's wand is holly, Hermione's is vine wood, and Ron's is ash.

The woods used in other wands can also reflect their owners' personalities. A wand made from rose wood and veela hair, possibly the most feminine wood-and-core combination possible, belongs to part-veela Fleur Delacour. Wood from a yew tree, which has poisonous sap and foliage, surrounds the phoenix-feather core of Voldemort's wand. A mighty, protective oak contributed the wood for half-giant Rubeus Hagrid's wand. Since holly keeps its green leaves all year and displays bright red berries in winter, some people see it as a sign of hope. Holly is also said to ward off evil, and it's part of Harry's wand.

The affinity between the type of wood and the person who wields it may be one of the reasons why witches and wizards can have less success with others' wands. It's certainly possible to use another's wand in a pinch. Barty Crouch, Jr. created the Dark Mark with Harry's wand, and Peter Pettigrew used Voldemort's wand to cast Avada Kedavra, the killing curse, on Cedric Diggory. Neville Longbottom used his father's old wand until his fifth year at Hogwarts. However, witches and wizards have the best results with the wands that chose them.

Wands have some magical power of their own, and in the hands of the non-magical -- Muggles -- they could be dangerous and unpredictable. But their primary role is to act as a focus for the abilities that witches and wizards already possess. For this reason, witches and wizards become completely familiar with their own wands. They can recognize their own wands immediately and can sometimes match other wands with their owners with little or no thought.

But sometimes, no matter what his intent, a wizard's wand will not function the way he expects it to. We'll look at why in the next section.

When wand makers gather wood for their wands, they may have to fend off bowtruckles. These small insectivores live in trees that produce wand-quality wood. Before attempting to harvest wood, wand makers should offer the bowtruckles wood lice or fairy eggs to placate them.

In Great Britain's wizarding world, the Code of Wand Use governs how witches and wizards may use their wands. According to the code, it's illegal for any non-human creature to carry or use a wand. 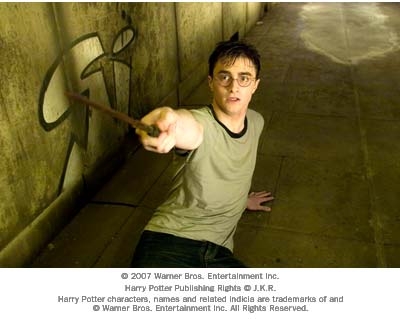