The Crew of Harry Potter 5 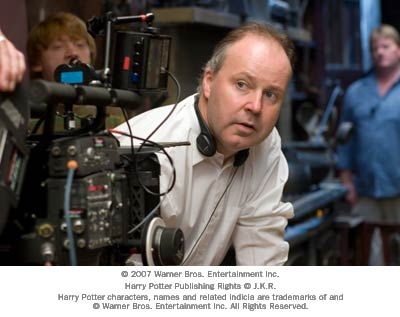 Director David Yates on the set of Warner Bros. Pictures' fantasy "Harry Potter and the Order of the Phoenix."

Having turned down many movie scripts because the quality didn't match what he'd done in TV until he read and fell in love with the characters and world of Harry Potter, Yates signed on for a two-and-a-half year commitment.

"I was involved with the script for a year and a half before we started shooting. I sort of made the film before I shot a single frame of film really because I had so long to prepare it. I storyboarded very carefully. By the time I got to the floor to direct the first shot on the first day, I'd already made the film three times over in my head. I think that made the studio and the producers much more comfortable, so once I started shooting they let me get on with it," Yates explains.

He concedes that working on a film with approximately 1300 effects shots was his biggest challenge, "making sure that they served the story as accurately as possible." Toward that end, he relied on visual effects supervisor Tim Burke, production designer Stuart Craig, special effects supervisor John Richardson, creature effects supervisor Nick Dudman and others on his creative team to realize his vision.

Producers David Barron and David Heyman on the set of Warner Bros. Pictures' fantasy "Harry Potter and the Order of the Phoenix."

Of the many logistic and technical challenges on the film, the sequence in the Hall of Prophecies near the end of the film topped the list. "It's a complicated, elaborate sequence involving a completely CG environment. We shot it all on green screen over a number of weeks," notes Yates. "Due to the availability of certain actors we had to shoot it very episodically so it was quite tricky." (The minor-age actors, Heyman reminds, are only available for four hours of shooting at a time.)

John Richardson, who supervised a team of 35, cites that scene and several others as his major challenges. "The final battle needed quite a lot of work from us in terms of blowing the set up, doing the spell wand effects, and a lot of different rigs for the Ministry of Magic, plus the scenes in the Great Hall where the Weasley twins are leaving Hogwarts forever and throw magical fireworks everywhere, causing mayhem throughout Hogwarts. What makes it complex is working out with Visual Effects [Department] -- who's doing what and where the joints are going to be. We did a lot of pre-preparation to get everything ready in terms of what David wanted and then worked together to make it happen."

Filmmakers are Fans, Too

Dudman had actively pursued the job on the first Potter film, having read and loved "Harry Potter and The Sorcerer's Stone." David Heyman, who can remember where he was when he read each book in the series, points to Harry's universal appeal as an everyman "with an extraordinary context and extraordinary abilities. Harry is a regular kid. He has problems at home. He comes to a school and finds the home and friends and family he never had in Ron and Hermione. We can all relate to those three kids in one form or other. Harry makes magic possible for all of us. And we would all like to go to a school like Hogwarts."

David Yates credits J.K. Rowling's ability to create real characters "and explore a lot of emotional stuff in a magical, heightened environment. It's a world you want to go to. It's a very warm place to be, and there's very little not to like." He and his colleagues are betting that audiences will feel the same way about "Harry Potter and the Order of the Phoenix."