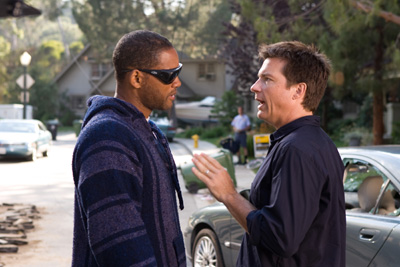 Most of "Hancock" was shot on locations in and around Los Angeles, including two jails (one for exterior, one for interior) and the downtown intersection of 5th and Figueroa for the bank standoff. To Akiva Goldsman, it was the most complicated sequence involving the principal actors. "There's cop cars, explosions, people moving back and forth and a lot of helicopter work," he notes.

The only scene filmed outside of L.A. posed a different problem. The final sequence, shot in New York City, originally called for Hancock to walk through Times Square, with autograph-seeking kids running after him.

But as Goldsman and Smith had discovered while shooting on "I Am Legend" there, Smith can't go anywhere without drawing a crowd, and the mob on this particular Friday night was large and rowdy. "It was pandemonium," recalls Goldsman, and that necessitated an improvised solution. "We went around the corner to 49th Street and we shot the scene."

Shooting on the streets of large cities requires planning and negotiation, especially in New York, but getting permissions and cooperation from local authorities isn't that hard "if you ask nicely enough," allows Goldsman, noting tax incentives, rebate programs and film commissions. "As long as you're not pissing people off, you're spending so much money that it's OK," he adds.

Weather didn't pose any obstacles thanks to the good California climate, but unexpected SNAFUs always arise. For example, "We planned to shoot in one direction on Hollywood Boulevard and found out the light was wrong, so we had to turn around. You always have to have two things in your head so you can go to Plan B."

It was somewhat of a relief to shoot scenes of the Embrey family at home in the relative quiet of the Universal back lot, a short walk from "Desperate Housewives'" Wisteria Lane and the "Ghost Whisperer" house -- and not far from the section later lost in a fire. But that location came with its own idiosyncratic problem. "It was right by the Universal tour," remembers Goldsman. "Often when we were ready to shoot, the tour tram would come by."

He isn't thinking about the logistics of a sequel just yet, even though "Hancock's" ending clearly sets one up. "Not till it's out in the world and people really like it do you really go there," he says. With "I Am Legend," we wouldn't have been able to kill [Smith's character] if we were thinking about a sequel," Goldsman points out. "You have to be able to think of it as its own thing."

For more information about "Hancock," the movie business and related topics, see the links below.