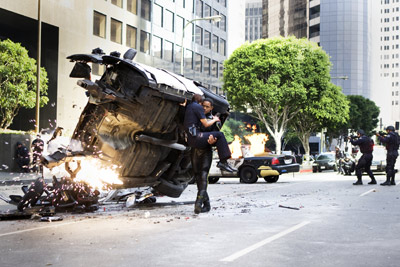 Hancock (Will Smith, right) saves the life of an injured female cop (Liz Wicker, left) - using her battered cruiser as a shield -­ before taking out a gang of heavily armed bank robbers.
© 2008 Columbia Pictures Industries, Inc.

While Will Smith spent many days in harness rigs suspended above various Los Angeles locations, the actual flying was done by his digital double, created via computer. Unlike the masked Spider-Man, an earlier Imageworks creation, Hancock wears no disguise, and devising a CGI version of the highly recognizable Will Smith was much more difficult. Several different versions needed to be created because Hancock changes clothes, and the flying simulation itself isn't straightforward. "He's supposed to be drunk," notes Carey Villegas.

The shots began practically, with Smith hoisted in mid air on wir­es. Camera­ positioned on the ground or on hydraulic cranes captured his movements that would be added to with a computer while erasing any evidence of wires. "Even when the wires are removed you still have a sense of where those wires were, so it's always a challenge," notes Villegas. "Also, we had to do a lot of post-camera manipulation to recreate the same style of photography that Peter Berg used. It's very frenetic and hand-held and incorporates a lot of snap zooms. We wanted to match that. Otherwise it would feel like a different film."

Not only did the VFX team have to adapt to Berg's fast-paced "run and gun" shooting style, "no matter how much pain it might cause us," laughs Hahn, the director made a few pretty tricky post-production requests, including a physically impossible visual punch line involving two prison inmates. "We never got the data on the actors we needed to make visual doubles for, but we came up with a pretty nifty rig that matched the live action shots and lived up to the challenge," says Hahn.

"Hancock's" final scene, conceived late in the game and shot in New York, was a last minute addition, but for the majority of the sequences the Imageworks team had more than a year to conceptualize and render the visual effects, beginning with the pre-vis (previsualization footage) that serves as a reference guide for the filmmakers and ending when post-production finished a few weeks prior to release.

They needed all the time they could get, because some of the most complex sequences to film were just as complicated for the effects team to execute, as we'll explain in the next section.