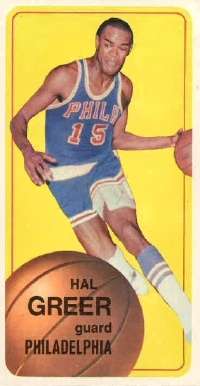 Hal Greer averaged more than 22 points per game on the 1966-1967 Sixers. See more pictures of basketball.

When Hal Greer retired from the Philadelphia 76ers in 1973, he was the NBA's all-time leader in games played, and he ranked in the top five in field goals made and attempted. Over the course of his career, he scored 21,586 points.

Few players of any vintage could match the 6'2" Greer jump shot for jump shot. An open 20-footer for him was like a layup for other players, and because his release was so quick, he didn't need a lot of cushion. His form was unconventional; he appeared to push the ball with both hands, waiting until the last instant to take his left hand off the ball.

Greer had such confidence in his jumper that he used it at the free-throw line and converted 80 percent. A blur on the fastbreak, he was considered the fastest man in the NBA in the 1960s.

Greer grew steadily with the Nats, scoring more each season until reaching 22.8 points per game in 1961-62. A year later, he was named second-team All-NBA for the first of seven consecutive seasons. On one memorable night during his rookie season, he erupted for 39 points in one half against the Boston Celtics.

In 1963, the Nats moved to Philadelphia, becoming the 76ers. But even with great players such as Greer, Wilt Chamberlain, and Billy Cunningham, the Sixers fell short against Boston in the playoffs in 1965 and 1966. The Sixers finally won in 1967 after rushing to a 68-13 record in the regular season. Greer set the tone against the Celtics in the Eastern finals, scoring 39 points in Game 1.

Greer lasted 15 seasons in the NBA and appeared in 10 All-Star Games. He was MVP of the 1968 game after scoring a record 19 points in one quarter. He was elected to the Hall of Fame in 1981.