Browse the article Inside 'The Golden Compass' 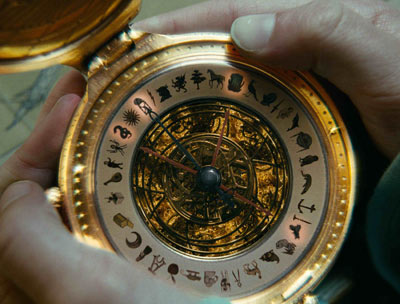 In the dozen years since the release of "The Golden Compass," the first book in Philip Pullman's "His Dark Materials" trilogy, the novel has won legions of fans and been made into a play and a radio show. Now it's a $180 million movie opening on Dec. 7, written and directed by Chris Weitz ("About a Boy"), starring Nicole Kidman and Daniel Craig and featuring some of the most complicated effects sequences ever seen on film.

In this article, we'll explore the unique challenges posed by bringing "The Golden Compass" to life and explain how its visual effects evolved, from concept to execution to final product.

Shot at England's Shepperton Studios -- and also in London, Oxford and the North Pole -- the film follows a young British girl named Lyra (newcomer Dakota Blue Richards) on her journey to rescue a kidnapped friend. It's a fantasy on an epic scale, set in a parallel universe where armored polar bears do battle and people's souls take the form of animal companions known as daemons. It required nearly two years to complete -- and the skill of hundreds of special effects artists in three countries.

"There were 1,100 to 1,200 CG [computer-generated] shots, average for a film like this, but the level of complexity far exceeded most," says visual effects supervisor Michael Fink, who worked on the film for 22 months. "There's an animated character in just about every one of those shots." Fink, the effects supervisor on "X-Men," "X-2," "Lethal Weapon" and "Batman Returns," says "The Golden Compass" is more complex than all of them combined.

One big challenge, ­Fink says, was the frequent interaction between humans and digital creatures -- like when people touch their daemons. The effects team had to come up with a way to make the computer-generated fur react to contact with a human hand. But the tougher problem was "a fully CG, fully animated fight between two bears in front of 100 to 120 other bears in the middle of a live-ac­tion movie," he says. "We had to create a photo-real environment with bears that you'd really believe are fighting."

Fink notes that such a sequence would have been impossible five or six years ago and "could have been done badly" two or three years ago. "Lighting is the biggest issue -- lighting a white bear in a snowy environment, or any environment, is one of the hardest tasks in CG," he says.

The armored bears, or Panserbjorne, were the work of London effects house Framestore CFC. Los Angeles-based Rhythm & Hues worked on the main daemons, and a number of other special effects companies handled various CG tasks.

On the next page, we'll meet the Rhythm & Hues team and learn how they created the daemons. 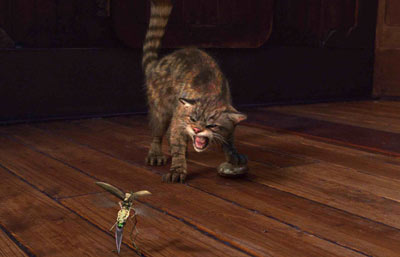 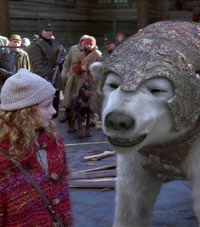 To learn more about "The Golden Compass" and movie special effects, check out the links on the next page.