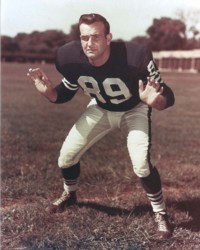 Gino Marchetti was a perennial  Pro Bowl choice and was  named to the NFL's 75th  Anniversary All-Time Team. See more pictures of football.

Gino Marchetti's father reluctantly allowed his son to go out for high school football, warning him, "Gino, whatever you do, stay out of the other boys' way so they no hurt you."

Although his boy made the varsity team, the elder Marchetti refused to go to any games, certain he'd see his son maimed.

Even when Gino -- grown to ample size and a World War II veteran -- starred for nearby University of San Francisco, Mr. Marchetti stayed home.

When Gino (born 1927) became an All-Pro defensive end with Baltimore, his father avoided games on TV.

He finally consented to tune in when the Colts met the New York Giants for the NFL championship in 1958.

He saw his son play brilliantly and lead the desperate rush that stopped the Giants as they tried to ice a victory. The Colts then kicked a tying field goal and went on to win in the first sudden-death overtime.

But the senior Marchetti saw something else. On the crucial play, a teammate fell across Gino's leg and broke it in two places. As Gino watched the deadlocking field goal from a stretcher on the sideline, he might well have reflected on his father's advice.

During most of his career, of course, the "other boys" had to stay out of Gino's way. No one played defensive end better. Possessing unusual speed for so large a man, he was deadly against runs and a brilliant pass rusher.

Curiously, the Dallas Texans tried to make him an offensive tackle when he joined them as a rookie in 1952. With the reorganized Baltimore Colts in 1953, he found his true niche, crashing past offensive tackles instead of trying to be one.

Veteran coach Sid Gillman called Marchetti "the most valuable man ever to play his position." He was voted All-Pro seven times and played in 10 Pro Bowls (the broken leg kept him out of an 11th). In 1969, he was selected as the best defensive end in the NFL's first 50 years.