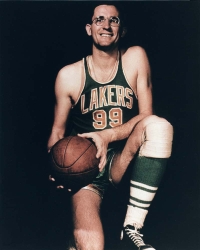 In 1950, the Associated Press honored George Mikan as the best basketball player of the first half of the 20th century. Mikan was the NBA's first superstar and the soul of the league's first dynasty, the Minneapolis Lakers. New York Knicks coach Joe Lapchick called him "the Babe Ruth of basketball."

Mikan's career began in earnest in 1942 at DePaul University, where he became a three-time All-American. He won one championship in college and seven more in the professional ranks. When he retired in 1956, he held numerous NBA records, including total points (11,764) and career scoring average (22.6).

A towering 6'10" center, Mikan was unlike any player the game had seen. To begin with, there were only a few big men in his day, and most were woefully lacking in basketball skills. Mikan, on the other hand, could shoot soft hook shots with either hand, and he was accurate from the free-throw line.

His strength allowed him to muscle to the basket for easy shots and rebounds, and he competed fiercely, once scoring 32 points in a playoff game despite playing with a broken leg. He dominated the middle so thoroughly that opponents simply stayed away from him. Eventually, several rules were changed to lessen his influence.

Mikan was born June 18, 1924, and grew up in Joliet, Illinois. Though he sprouted to 6'8" by his senior year at Quigley Prep, his participation in basketball amounted to only a handful of games each season. Nevertheless, a couple of colleges showed interest. Mikan chose DePaul, arriving on campus about the same time as coach Ray Meyer.

Sensing Mikan's potential, Meyer developed a unique workout regimen, consisting of skipping rope, shadowboxing, modern and ballet dancing, and a daily routine of 250 hook shots with each hand. In short order, Mikan was transformed from an ungainly neophyte into the best player in the land. He averaged 23.3 points during his junior season and led DePaul to the National Invitation Tournament championship.

Pro basketball experienced seismic changes in the late 1940's, with rival leagues vying for players and franchises folding at the drop of a hat. Mikan signed with the Chicago Gears of the National Basketball League in 1946, a move that enabled him to continue playing while pursuing a law degree at DePaul. But the Gears disbanded a year later, and Mikan was awarded to the Minneapolis Lakers.

The Lakers dropped out of the NBL to join the Basketball Association of America in 1948. For the 1949-1950 season -- Mikan's fourth as a pro -- teams from the NBL and the BAA merged to form the NBA. Mikan was the league's first scoring champion with 27.4 points per game. The Lakers were a juggernaut.

Mikan, Slater Martin, Jim Pollard, and Vern Mikkelsen all had Hall of Fame careers. Yet Mikan was the undisputed king. During the BAA playoffs in 1949, he averaged 30 points per game while the rest of the Lakers combined for 50. In 1952, he scored 61 points in a game against the Rochester Royals.

When he was in college, Mikan liked to snatch opponents' shots on their downward arc. In response, a goaltending rule was instituted. In 1951, in a move directed at Mikan, the NBA expanded the width of the lane from six feet to 12 feet. Coupled with the three-second rule, this effectively pushed Big George away from the basket.

His scoring average dipped to 23.8 during the 1951-1952 season, but the Lakers still won the championship. The NBA also experimented with 12-foot baskets in exhibition games, another measure designed to lessen Mikan's stranglehold on the game. Mikan quit in 1954 to become the Lakers' general manager. He was only 29 but his body had taken an enormous beating.

Before the advent of the 24-second clock in 1954, a popular strategy when facing the Lakers was to play keep-away from Mikan. On November 22, 1950, the Fort Wayne Pistons took that approach to the extreme.

The result was a 19-18 Pistons win -- the lowest scoring game in NBA history. No game better illustrated Mikan's power: The Pistons couldn't beat him straight up, so they resorted to gimmicks.

Big George scored 15 of the Lakers' 18 points, including all four of their field goals. He had four of their nine rebounds. The Lakers led 17-16 entering the fourth quarter and held their lead until the final seconds, when Ft. Wayne's Larry Foust made the winning basket. 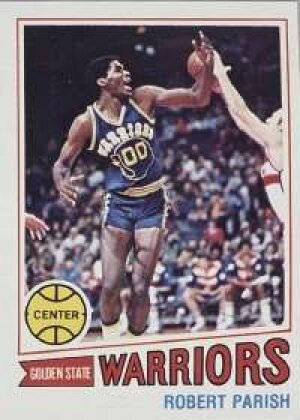 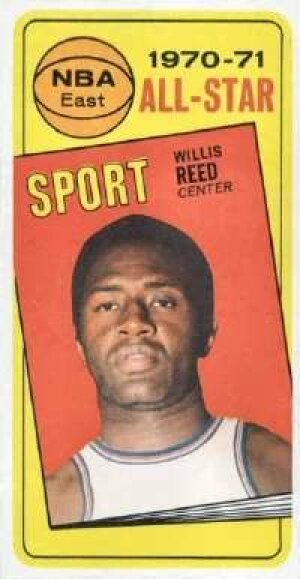