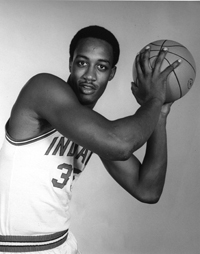 George McGinnis rivaled Julius Erving as the best player in the league, in the halcyon days of the American Basketball Association. During one season, he even tied Erving for the Most Valuable Player Award.

McGinnis was responsible for the greatest statistical game in ABA history -- 52 points and 37 rebounds -- and played in the ABA Finals three times in four seasons.

More than 20 years later, he still holds Indiana Pacers franchise records for points in a game, rebounds in a game, and single-season scoring average. The Karl Malone of his generation, McGinnis moved easily and pounded the offensive boards. He enjoyed contact from his days as a prep football All-America lineman. "I like going inside, knocking a few people around, and coming out with the ball," he said.

Only 20 years old when he joined the professional ranks, McGinnis tended to lose control early in his career, launching no-hope jump shots or barreling into defenders, all while trying to imitate the more popular Erving. Yet despite his recklessness, McGinnis could be a team player. He averaged 8.2 assists in the 1975 playoffs -- along with 32.3 points and 15.9 rebounds!

Born August 12, 1950, in Indianapolis, McGinnis became a Hoosier state institution, winning Indiana's coveted Mr. Basketball award in high school before signing with Indiana University in 1969. His 30.0-points-a-game scoring average ranked fourth nationally in 1971, and he was among the best rebounders at 14.7 a game. After one season at IU, he signed with his hometown pro team, the Pacers.

Big George (6' 8", 240 pounds) played 11 pro seasons, beginning and ending with the Pacers. In between, he played for the Philadelphia 76ers and the Denver Nuggets of the NBA, having jumped to the 76ers in 1975, a year before the leagues merged. Though he averaged more than 20 points his first four seasons in the NBA, his best years were in the ABA.