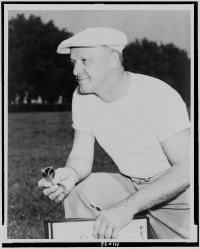 NFL
George Halas is the embodiment of pro football -- he served as  GM and owner. See more pictures of football players.

Today the Pro Football Hall of Fame in Canton, Ohio, sits on George Halas Drive. No address could be more appropriate. Halas is arguably the most important figure in the history of pro football.

At the University of Illinois, Halas (1895-1983) was a good, though not great, two-way end. In 1919, he played pro football in Chicago and, briefly, major-league baseball with the New York Yankees.

A hip injury ended his baseball career. A. E. Staley, owner of a Decatur, Illinois, starch company, hired Halas as coach of the company's baseball and football teams.

By offering players positions with the company plus paid practice time, Halas was able to build a strong football team. When he learned a league was to be formed in Canton in 1920, he made the Staleys charter members. In the early years of the NFL, Halas was one of the most steadfast and influential leaders at league meetings.

In 1921, Halas moved the Staleys to Chicago and won his first league championship. The next year, he and partner Dutch Sternaman secured their own franchise and renamed the team the Chicago Bears. Halas raised pro football enormously in the public’s estimation in 1925 by signing All-American Red Grange and launching a coast-to-coast barnstorming tour that played to huge crowds.

After a hiatus, Halas returned to coach the Bears in 1933 and won his second NFL title. His greatest period as a coach was the 1940s, when his Bears won four league crowns. Much of that success was due to the development of the modern T-formation pioneered in part by Halas and his assistants. The Bears' dominance led to the "T" becoming the standard football offense.

Halas won his final NFL championship in 1963 with a team keyed by a magnificent defense. In 40 years of coaching, Halas compiled a 324-151-31 mark. Only Don Shula, in an age of longer seasons, has won more pro games. Until his death in 1983, Halas continued to be a leader among NFL owners.