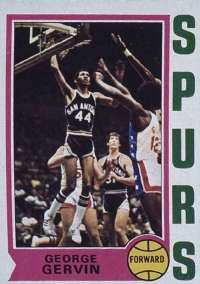 George Gervin rose from an impoverished childhood in the slums of Detroit to the heights of stardom in professional basketball, first in the American Basketball Association and then in the NBA.

How influential was Gervin? He played in 12 straight All-Star Games -- from 1974 with Virginia through 1985 with San Antonio -- and is one of four players in NBA history (along with Wilt Chamberlain, Michael Jordan, and Allen Iverson) to win four scoring titles. Julius Erving once said that Gervin was the player he most liked to watch.

Though he played forward early in his career, Gervin was the prototypical off guard. He didn't like to handle the ball and wasn't a good passer, but he loved to shoot. The faster the pace of the game, the more he liked it. "Street-like basketball," Gervin once said. "That's what I'm all about."

Gervin had a vast repertoire of shots, including a running semihook that was nearly impossible to block. His release was quick, and at 6'7" he had a height advantage over most guards. He made the game look easy, and courtside observers swore he never broke a sweat. Teammates began calling him "Iceman" because Gervin was "just so cool."

One of six children raised by his mother after his father left home when George was a toddler, Gervin (born April 27, 1952) channeled his energies into basketball. Despite a woeful academic record, he was given a scholarship to play for Long Beach State University. Homesickness soon drove him back to Detroit and then to Eastern Michigan University.

In 39 games with EMU, he averaged 26.8 points and 14.4 rebounds per game and reigned as their greatest player ever. However, he was suspended from the team for punching an opponent. Gervin surfaced with a semipro team in Pontiac, Michigan, where he was spotted by the Virginia Squires of the ABA and signed to a contract in 1972.

After Bob Bass became coach of the Spurs in 1974-75, he moved Gervin to the backcourt to play alongside James Silas. With the Iceman and "Captain Late," as Silas was known, the Spurs had the ABA's best guard tandem. Both players averaged more than 20 points per game during the 1975-76 season.

The move did wonders for Gervin's career. His scoring average skyrocketed, and he went from a below-average rebounder at forward to an above-average rebounder at guard. Defensively, he no longer had to worry about wrestling with players who outweighed him by 30 or 40 pounds. (Defense was never a Gervin strong suit, though he later became the first NBA guard to block 100 shots in a season.)

In 1976-77, after the Spurs joined the NBA, Gervin made the All-Star team and triggered the league's highest scoring offense. The next season, he won the first of three consecutive scoring titles, peaking at 33.1 points per game in 1979-80. He added a fourth in 1982. In 1984, he passed Elgin Baylor for 10th place on the all-time scoring list.

The Spurs took a precipitous drop in the 1983-84 season, and Gervin also declined quickly. After the season, Cotton Fitzsimmons was hired as coach, and the next year Gervin was relegated to the bench. In October 1985, the best player in franchise history was traded to Chicago to make room for young guard Alvin Robertson.

Gervin played one season with the Bulls (the year Michael Jordan was injured) and one season in Italy before calling it quits. He returned to play 14 games in the CBA in 1989. Later, he was hired to work in the Spurs' front office. Thanks to his 26.2 scoring average in the NBA (sixth best ever), Gervin was elected to the Hall of Fame in 1996.

A few hours later in New Orleans, Gervin scored 20 points in the first quarter against the Jazz. Continuing to shoot at a breakneck pace, he amassed 33 points in the second quarter -- the most ever scored in a quarter in an NBA game. Ice had 53 points by halftime! After catching Thompson in the third quarter, his scoring frenzy abated. Although he played only 33 of 48 minutes, Gervin finished with 63 points. His final scoring average (27.22) nipped Thompson's (27.15) in the closest scoring race in pro basketball history.