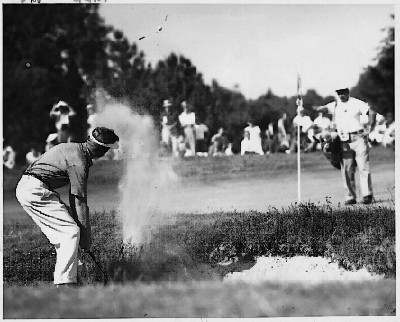 Hailed as one of the game's coming superstars in the mid-1950s, Littler went on to a long and successful career that included 29 PGA Tour victories over a span of 23 years. His only disappointment was that he won only one major championship, the 1961 U.S. Open.

Littler was born in San Diego in 1930 and first made an impact in the game when he won the 1953 U.S. Amateur. Still an amateur in 1954, he won his hometown event on the PGA Tour, the San Diego Open. Shortly thereafter, he turned pro.

Littler's "golden boy" reputation was furthered when he finished second in the 1954 U.S. Open, missing an eight-foot putt on the 72nd green that would have gotten him into a playoff, and won four times in 1955. Littler slumped for a couple years, but he had his best year in 1959 with five victories.

The biggest win of his career came two years later when he took the U.S. Open at Oakland Hills. He came from three strokes behind by shooting a final-round 68.

Littler came close in two other majors, losing in playoffs at the 1970 Masters to boyhood friend Billy Casper and the 1977 PGA Championship to Lanny Wadkins. At the latter event, the 47-year-old Littler was trying to become the second-oldest major-championship winner ever (Julius Boros won the PGA Championship at 48), but he lost a five-stroke lead on the back nine.

Littler finished among the top 32 money winners every year but one from 1954-75 (ranking second in 1959 and 1962). The lone exception was in 1972 when he underwent surgery in the spring for cancer of the lymph glands. He was back in action six months later and won a tournament the next year.

In 1975, at age 45, he won three times and finished fifth on the money list. His final PGA Tour victory came at age 47. He has gone on to add eight official and eight unofficial Senior PGA Tour wins.