What special gear is used to film on a boat?

Browse the article What special gear is used to film on a boat? 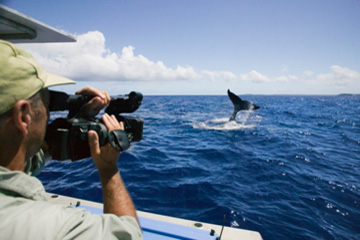 It may not seem like much to film on a boat, but it can actually be quite dangerous. See more TV Show Pictures.
Sue Flood/Getty Images

Camera operators have a lot to contend with when they're filming a scene, even on land. Set the scene on a boat and the risks and variables are multiplied. Whether you're shooting a gripping documentary, a dramatic movie scene or just some family videos, filming on a boat requires some special techniques and equipment along with a lot of attention to safety.

The most important thing to know about filming on a boat is that you can be killed while doing it. Even if you're filming on a small boat in calm water it can be very dangerous. While operating a camera, your attention can be diverted and a sudden shift in the boat can send you overboard. If possible, wear a tether or employ a spotter to watch your back for you.

Unless you plan to shoot underwater, you don't need a special camera to film on a boat. That said, make sure you get the highest quality camera you can afford. If you'll be using the camera as a handheld, make sure it's compact and light enough to maneuver easily. Look for a camera with an LCD view screen. This lets the operator see how a shot is framed without peering through a small viewfinder. The extra visibility and awareness is crucial for avoiding the various hazards one might encounter on the deck of a boat. Be wary of underwater cameras -- some of them have optics designed specifically for shooting under water, so they won't capture clear images above water.

Your camera will need to be waterproofed. A typical waterproofing job encases the electronics in plastic bags while leaving the lens free. Sealant can also be applied to vulnerable areas. Keep in mind that any camera will eventually suffer damage from repeated exposure to water, no matter how well it's been waterproofed. Film stock will need to be kept in waterproof containers both before and after use. No particular film is needed for shooting on a boat; the producers will be able to determine the type of film best suited for the shoot.

The rule of thumb for filming on a boat is to let the camera mimic a person's point of view. A human on a boat tends to see the horizon as stable even as the boat rocks and sways. Therefore, a handheld camera in the hands of a skilled operator is the best way to shoot on a boat. However, shooting from a tripod or a camera mounted to a fixed position on the deck can create dramatic shots or accentuate the movement of the boat in rough waters.

Audio can be tricky on a boat, since wind noise can be an issue and the boat's movement can make micing difficult. Boom mics are usually impractical if the boat has a lot of rigging or mechanical gear on deck, but a shotgun mic attached to the camera itself can be effective with a decent wind muffle. If conversations need to be recorded, the subjects can wear microphones around their necks or attached to their shirts.

Filming on a boat requires some care and attention to detail, but the risk can pay off with remarkable images you can't capture any other way.