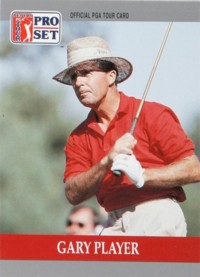 Gary Player was considered one of the "Big Three," alongside Jack Nicklaus and Arnold Palmer.

If nothing else, Gary Player could have gone down in golf history as the most widely traveled champion of all time.

However, it is generally agreed that even if he didn't have to put a million or so miles on his personal odometer, he would still have had his extraordinary career in major-league competitive golf. All professional golfers, by definition, must play on the road. Player's globetrotting was just more extensive and gave his record a little different twist.

Gary Jim Player was born in 1935 in a suburb of Johannesburg, South Africa, but he was raised in that nation's capital.

Despite being small and slight of build, he stood out in numerous "physical" sports -- cricket, rugby, soccer, track, swimming, and diving -- and even as an adult seemed no bigger than a jockey compared to almost all the golfers he outplayed.

Player is one of only four golfers to have won every major championship in the game at least once. This puts him in the company of Ben Hogan, Jack Nicklaus, and Gene Sarazen.

Player took up golf at 15 at the behest of his father, himself a good player. He was hooked on the game from the start, a romance that may also have had to do with his meeting the girl who would become his wife. Her father, Jock Verwey, was a well-known golf professional in Johannesburg. Player would work for him as an assistant pro.

Early on, Player had an unorthodox and rather bizarre golf swing, in large part the result of feeling that he had to hit the ball as hard as possible to make up for his size. Yet, he did well at the highest level, an indication of his innate talent at the game as well as a competitive zeal to sustain that talent.

In 1956, he won his first South African Open (he would win 13 in all) as well as a tournament on the British Tour. He also finished fourth in the British Open that year. Player then went about the process of altering his overly strong grip and long and complicated swing, and almost immediately he began his rise to the top of the heap.

Interestingly, he did not lose any power. Pound for pound, he was one of the longest hitters in the game, and he was his own best example of the advice he has always given youngsters starting up in golf: First learn to hit the ball for distance, which will always stay with you, then learn to golf the ball for score.

Recognizing that the U.S. PGA Tour was the ultimate training (and proving) ground for big-time golf, Player in 1957 began traveling regularly to play in the United States.

In 1958, he won his first American Tour event, the Kentucky Derby Open. In nine tournaments on the U.S. circuit that year, he finished in the top 10 10 times, including a second-place showing in the U.S. Open.

In 1959, Player won the first of the three British Opens he would capture. In 1961, he won three times on the U.S. Tour, including his first Masters to become the first foreign player to win that championship.

In that Masters, a main feature of Player's golf would come to the fore. On the last day, playing to a delicate pin position from the greenside bunker on the 18th hole, he got down in two for a 280 total.

A few minutes later, Arnold Palmer made a 6 from almost the identical spot in the same bunker to finish in a tie for second. In practicing bunker shots, Player would often stay at it until he had holed at least one, sometimes more.

Player's reputation had now grown to such an extent that he, along with Palmer and Nicklaus, were considered golf's "Big Three." That was in part a bit of promotional wizardry by the agent handling all three players, but it was still pretty close to reality.

On the Senior PGA Tour, Player won 18 times from 1985-95, a tribute not only to the quality of the game he put together years earlier and with which he never stopped adapting, but to the superb physical condition that he always maintained.

Through much of Player's career, he was a red flag for people protesting, often quite vigorously, the infamous policy of apartheid that was long extant in his country.

Player invariably handled it with admirable diplomacy, and he made a point to invite such black golfers as Lee Elder to play at the South African PGA Championship and other tournaments in Player's homeland before the racial policy there was dissolved. In this, Player has contributed to golf in a way more valuable than his competitive record.