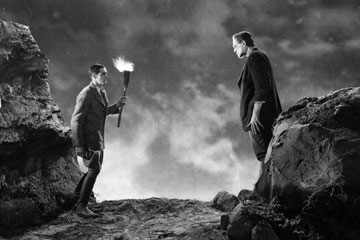 In recounting his tale of scientific glory and personal hell, Victor Frankenstein skims over the pertinent scientific details. He discusses his alchemical inspirations and zeal for modern chemistry. He mentions cadavers and the effect of electricity on muscle tissue. He stares deep into the space between life and death. Beyond this, we can only guess how Frankenstein learned to "bestow animation upon lifeless matter."

Scientists of the 20th and 21st centuries, however, are a lot more forthcoming. Advances in synthetic biology and other fields continue to push the boundaries of human understanding and raise new existential dilemmas.

In 1952, researchers unlocked the mystery of DNA, and subsequent breakthroughs in genetics have empowered the science of cloning. In 2010, researchers created a synthetic bacterium in the lab -- the first one to be controlled entirely by man-made genetic instructions. Elsewhere, roboticists continue to develop increasingly complex, autonomous artificial intelligence and biologically inspired mechanical forms.

Through it all, Frankenstein's monster continues to resonate as a powerful model of unchecked scientific advancement -- as well as a reminder of the murky philosophical and ethical quagmires we wish to avoid.

Thanks in large part to film depictions, the monster's pop culture image is often reduced to a staggering, bewildered brute. But even if you take into account the original creature's intelligence and complexity, he is most certainly a monster in the true sense of the word. The word "monstrosity" originates from the Latin monstrare, which meant to show or illustrate a point. Our monsters embody ideas, fears and abstractions about the human condition.

Victor Frankenstein ultimately loses everything to the monster. He agrees to create a female companion for it, but destroys it in a rage and breaks their fragile truce. Provoked, the monster murders Victor's bride. In the end, the bloody feud condems both tormented souls to a death amid the Arctic wastes.

As a modern myth, "Frankenstein" taps into the fear that like Victor, we'll lack the wisdom or responsibility to control our scientific creations. The monster embodies such modern fears as a lab-created black hole, man-made plagues and nuclear annihilation. The story also poses the possibility that, like the monster himself, science will deliver us to a place where we find the integrity of the human body violated and the nature of the human soul scourged.

Explore the links below to learn even more about Frankenstein's monster and the advancement of science.