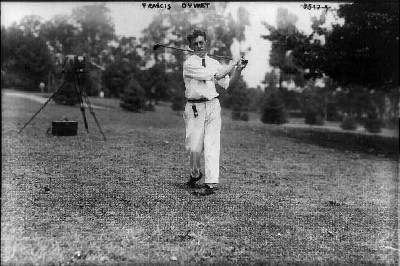 Ouimet devoted a lifetime to golf and was one of its leading dignitaries. See more pictures of the best golfers.

Francis Ouimet wasn't a completely untried and unknown golfer when he achieved his monumental U.S. Open victory in 1913.

The 20-year-old Boston boy was the current amateur champion in Massachusetts, a state with some of the game's best players at the time, and two weeks earlier had reached the second round of the U.S. Amateur championship before losing to the eventual winner.

Still, for Ouimet it was like coming out of nowhere to win a playoff over Harry Vardon and Ted Ray. There was enough wonderful coincidence in Ouimet's victory to fill a romantic heart to the fullest.

Ouimet grew up a pitch-shot distance from the site of his achievement, The Country Club in Brookline, Massachusetts, where he began his golf career as a caddie. He was a modest, polite, tallish young man with a studious air.

Perhaps most significantly of all, he was an amateur who not only beat the two of the best players in golf in a head-to-head contest, but they were professionals to boot.

In those years, amateurism was far more highly regarded. Professional golfers were considered mere mercenaries who were treated not unlike second-class citizens; for instance, they were not allowed into the clubhouses of private clubs.

And, of course, Ouimet was an American defeating the lords of British golf, at a time when the Boston Tea Party that took place only a few miles away and was so important to the American Revolution was still fresh in the national psyche. Ouimet was the first amateur to win the U.S. Open and only the second native-born American to do so.

The positive repercussions of Ouimet's victory could never be measured precisely, but there is little doubt that it led to a far wider interest in golf in the United States. Ouimet was not a fluke.

In winning the 1913 Open, he staged a rally in the fourth round to force an 18-hole playoff. He dominated in the extra round, posting a 72 to Vardon's 77 and Ray's 78. In 1914, Ouimet opened his defense of the U.S. Open crown with a 69, only one shot back of the leader and eventual winner, Walter Hagen. Ouimet ended up tied for fifth.

Two weeks later, Francis won the U.S. Amateur championship, trouncing by a whopping 6 & 5 margin the man who had defeated him the year before in that event, four-time champion Jerry Travers.

A serious student of swing technique, and an early investigator of the mental side of golf, Ouimet continued to play at a high level for some 20 years. In 1920, he won the North and South Amateur, a championship that was a close second to the U.S. Amateur in prestige.

That same year, he went to the finals of the U.S. Amateur, defeating Bobby Jones in the semifinals before losing to Chick Evans.

Evidence that he had crafted a long-term golf game, Ouimet in 1925 made a spirited try for the U.S. Open, finishing only one stroke off the winning total posted by Jones and Willie Macfarlane. Then in 1931, 17 years after his U.S. Open triumph, he won his second U.S. Amateur, defeating Jack Westland in the final by 6 and 5.

It was not quite his last hurrah. The next year in the Amateur, Ouimet shot a 30 on the first nine of his first match and went to the semifinals before losing to a future U.S. Open champion, Johnny Goodman.

Ouimet would play on the first nine U.S. Walker Cup teams (beginning with 1922's unofficial meeting through 1934), was the playing captain on the last two teams, and was nonplaying captain four times afterwards.

Ouimet was also the catalyst for what became a more progressive reading of the Amateur Code. In 1916, Ouimet was banned from amateur competition because of an interest he had in a sporting goods store in Boston. The USGA apparently felt he was cashing in on his celebrity status as a golfer.

Nothing could be farther from the truth. Ouimet was a devoted advocate of amateur golf, and he had spurned opportunities to truly cash in by playing exhibitions for money and endorsing products.

The ban caused an angry furor for what was deemed a too-narrow amateur status stance, and also because the soft-spoken, affable Ouimet was much loved by the golfing public.

The USGA more or less side slipped the controversy in 1918, after he was inducted into the U.S. Army. The USGA used this event to lift the ban and reinstate Ouimet's amateur status. Not one to hold a grudge, Ouimet would later serve for many years on the USGA's Executive Committee. In time, the USGA, with some input from Ouimet, would soften its Amateur Code.

Such was the esteem in which Ouimet was held in the world of golf that, in 1951, he became the first American to be honored as the captain of the Royal & Ancient Golf Club of St. Andrews, Scotland. He died in 1967.