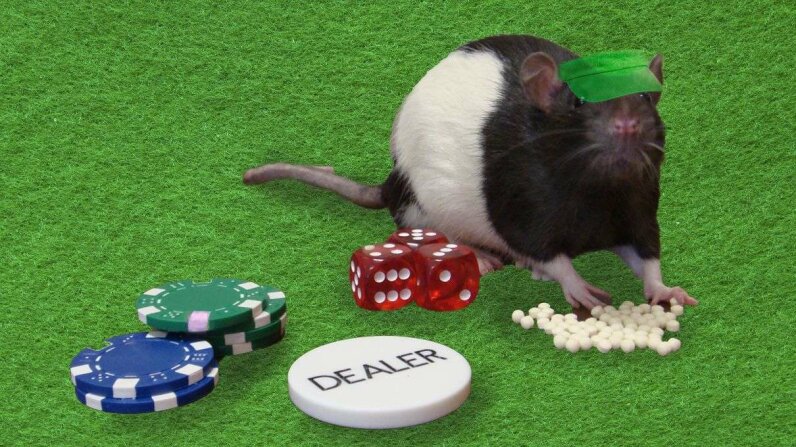 Ever walked into a quiet, calm casino? Yeah, didn't think so. There's a reason they're always full of lights and sounds, and it's probably got everything to do with lowering your gambling inhibitions and getting your bank account to go “all in.” Now, a new rat behavior study is shining new light on a long-held theory that noise and visual stimuli encourage risky, often addictive pastimes, like gambling.

So how do you get a rat to gamble, you ask? Since there isn't a rat casino in Las Vegas, researchers at the University of British Columbia in Canada started off by using the Iowa Gambling Task. This test assesses risky decision-making in humans.

For the purposes of this research, each rat was presented with four options with varying levels of win/lose probability and payout potential, the reward being yummy-in-the-tummy sugar pellets. In a span of 30 minutes, each rat had to make decisions that were either high-risk/high reward (with added potential for a rat time-out thrown in there), or lower risk/lower reward.

“In order to accrue the most sugar pellets in a session, the rat therefore needs to play it safe and choose the options that give smaller per-trial wins, but that results in steady-state accumulation of reward, rather than favor the tempting high-reward options that are associated with heavier penalties,” explains psychology professor and co-researcher Dr. Catharine Winstanley in an email interview. In other words, slow and steady wins the race, but like many humans, not all rats care for such buttoned-up advice.

In the midst of the study, the researchers realized that the original experiment didn't feature any of the “bells and whistles” that so often accompany a casino gambling “win.”

“It's particularly noticeable with respect to the electronic gambling machines, like slot machines, that are thought to be particularly addictive,” she says. So they added flashing lights and tones of varying levels that correlated with the awesomeness of the win (loud and flashy for a big score, calmer and less celebratory for modest success). When they did that, they found that the rats left off their cautious learned behavior, went for the gusto and made many more risky decisions.

“We were aiming to match, albeit roughly, the way in which larger wins in gambling result in greater audiovisual stimulation,” Winstanley explains. “Many studies suggest that these types of environmental cues, when paired with drug-taking, can induce craving and promote relapse. So, we wondered if adding these cues into a gambling game might actually increase risky choice, potentially indicative of vulnerability to gambling disorder.”

After establishing the relationship between the cues and risky behavior, the scientists then investigated dopamine's role in the whole shebang. The neurotransmitter dopamine is known to go hand in hand with pleasure, with addictive behaviors like drug and alcohol abuse responsible for causing a “powerful surge.” In fact, the rat study revealed that the stimulatory cues (lights and sounds) made them sensitive to dopamine D3 receptor drugs, with D3 agonists linked to increased risky behavior. By contrast, when scientists gave the rats D3 antagonists, they were able to block dopamine signaling, so the flashing lights and sounds no longer had any effect on the rats who were problem gamblers.

She and her fellow researchers were very excited by these findings because “numerous other studies indicate that D3 antagonists would be a good treatment for drug addiction, and have little effect on non-addictive behaviors." (In this study, the dopamine blockers had limited effect on rats when they gambled without the lights and sound).

“We therefore think that adding cues into the task has made risky choice more ‘addiction-like,' and recruited the same brain chemical signaling systems as drug addiction,” Winstanley says.

The findings have the potential down the line to influence addiction treatment, possibly even prevention. “We are hopeful that these findings could contribute to both discovery of drug treatments for addiction disorders, but also a greater understanding of what role environmental cues are playing in mediating addictions,” she adds.