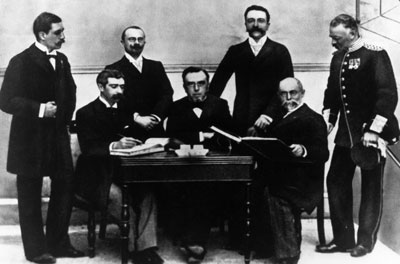 In the 1800s, the Greeks began hosting athletic competitions again, hoping they'd gather the kind of steam that got the Olympics rolling. But the games didn't take off.

It took a real visionary to resuscitate a tradition that had been dead for nearly 1500 years. A French baron named Pierre de Coubertin thought that he could reform the French educational system by emphasizing the type of athleticism that the Greeks conceived of. Coubertin wanted to see his countrymen develop into great scholars and citizens as well as great sportsmen. Nurturing and pushing the body to its limits was just as important to Coubertin as challenging one's mind.

He proposed the idea of holding Olympic Games in France to the Union des Sports Athlétiques in 1892. No one was too keen on the idea, but Coubertin was determined to follow through with his athletic revival. Two years later, on June 16, a committee made up of international delegates embraced his idea when he framed the notion of the Olympic Games as a diplomatic opportunity to mend a fractured world. Coubertin got the support of Belgium, England, Greece, Italy, Russia, Spain, Sweden and the United States -- even his skeptical homeland, France, got on board [source: Scholastic].

While Coubertin wanted to host the games in France, the committee thought it proper to pay homage to the founder of the games by holding them in Greece first. So Coubertin compromised: France would host the Olympics at the start of the new century in 1900, but Greece would host the very first Modern Olympic Games in 1896. The precedent of holding the games every four years was re-established, and a new precedent was created: The Olympics would be held in different locations each time they occurred.

Not only could these ancient Greeks philosophize and invent medicine with the best of them, they showed their faces and skills at the Olympics, too.

Other lesser-known but notable winners include: