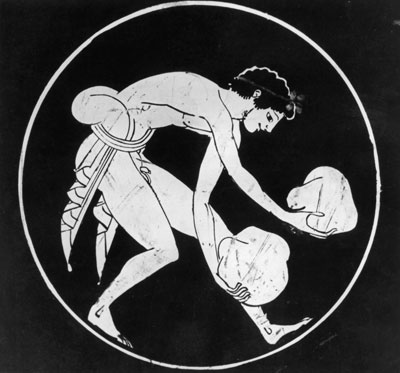 The original Olympic events required minimal amounts of gear and equipment. They were tests of strength, agility and endurance. And at least one of them has mythical roots.

From 776 B.C. until 724 B.C., the only Olympic event was the stadion. The stadion was a running event -- specifically, a race spanning 600 feet (182.9 meters). Our knowledge of the stadion comes from its mention in ancient Greek poems and its depiction on pottery vessels. Some sources refer to the event as the stade race and estimate its length at 200 meters (656.2 feet) [source: International Olympic Committee]. Other running events added later included the dialous, a 400-foot (121.9 meter) race, and the dolichos, a race that ranged from 1400 feet (426.7 meters) to 4800 feet (1463 meters).

Some especially nimble athletes were skilled at the long jump. Jumpers strapped halteres (weights made of stone or lead) to their legs, which helped them gain greater distance. Before they landed, they'd rip off the weights and toss them aside to guarantee a safe return to the ground. Stone and lead weights were also used in the discus throw. The discus throw was pretty similar to the modern event, in which the thrower spins in a circle and releases a heavy disc toward markings within a confined space. Ancient Olympic discuses were later made from iron, lead and bronze.

In 708 B.C., the pentathlon became a part of the games. We don't know much about the pentathlon except that it was added after wrestling became part of the Olympic line-up and that it was loosely based on Spartan warrior techniques. Because the modern pentathlon includes archery, fencing, swimming, jumping and running, we can guess that the event was similar to a relay race in which athletes were tested by several diverse activities.

Wrestling and boxing were two of the most physically combative sports in the games. While wrestling was strictly hand-to-hand combat, boxing permitted use of primitive gloves called himantes. Himantes were little more than bands that wrestlers wrapped around their hands for support. In addition to supporting the wrestler, himantes could also do some serious harm to the combatant -- when struck across the face with the hard, rough leather himantes, the resulting wounds could permanently deform features [source: International Olympic Committee]. Pankration was an even more violent event. It was a gory showdown that combined the roughest boxing and wrestling maneuvers. According to Greek mythology, Theseus invented pankration to defend himself against the minotaur (a creature half-bull and half-man) he encountered in the labyrinth.

Equestrian events drew large crowds and some regal competitors to the Hippodrome. Chariot races in particular were very cutthroat events, and royals clamored to claim victory as preeminent charioteers. It wasn't unheard of for royals to cheat in these races in order to gain the title of champion. Not that all the royals competed -- the title went to the owner of the horse, not the athlete competing in the event. So some kicked back in the stands while commissioned athletes drove their horses to victory.

Just who were these ancient athletes? And did they really compete naked? Read on to learn more.

While the marathon has its roots in ancient Greece, it wasn't a part of the ancient Olympics. The ultra-endurance, 26.2 mile jaunt wasn't added to the Olympic line-up until the end of the 19th century. We'll take a closer look when we examine the first modern Olympics.