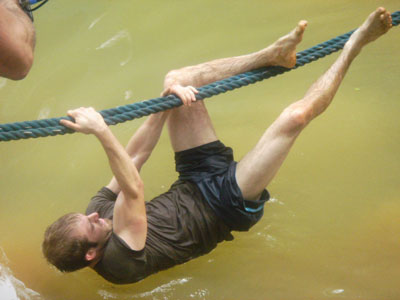 Even though Smith and Anderson were trained in various martial arts, nothing could prepare them for what they experienced on their quest. In every country, the master trainers thought that Anderson and Smith were actors first and fighters second. This was something they both worked hard to undo. Anderson says:

"The first day they either try and go easy on us because they think we're actors, or they go hard on us cause they want to watch us fold up and quit. Neither method worked. Either way, by the end of the first day we're getting the real deal. What was often the case is that they'd go in and say 'We're gonna try to break these guys.'"

­Since they trained separately, they typically had drastically different experiences. In the Philippines, Smith trained in a traditional, if rudimentary, gym. Anderson found himself crawling face down through mud pits in what can only be described as a jungle boot camp. While Smith worked out with punching bags, Anderson went through a series of ceremonies and rituals. At one point, he was laid on a cot with his eyes closed while Filipino kali masters beat his stomach and slapped his face. They finished off the session by sacrificing a chicken and drizzling the blood over his face and body. Anderson called it "the most grueling physical challenge of my life."

In Japan, Anderson builds his strength up by breaking boards with his bare hands.
Discovery Channel

In Japan, Smith trained in a gym in Tokyo­ while Anderson headed for the mountains to the north. Doug toughened his knuckles by punching trees and walking up flights of stone steps on his fists with someone holding his legs. Jimmy built his strength breaking boards, ceiling tiles and baseball bats with his fists and feet. He also ate the traditional Japanese "fire curry" which had him and his training partners dripping sweat and guzzling water.

In Mexico, Jimmy lived and trained with Olympians and Golden Glove champions in Mexico City. Doug was taken to ancient Aztec ruins 10,000 feet above sea level. The altitude was one of the most challenging aspects of the training. Doug did squats holding huge rocks and cut through large fallen trees with an axe. While it seemed like Jimmy had it easier, his training sessions with the Olympians were brutal and "bordered on hazing."

In the next section, we'll look at the brutality of the final fights, from broken faces to infected feet.

­­Q: Were there any fighting styles that you were leery of?

A: Any kind of "street style" made me nervous. Krav Maga uses a lot of eye gouges and groin strikes. I'm not used to having to protect those areas. If something goes wrong by a couple of inches, you know, you're blind.

Q: Will any of the training aid your MMA career?

A: Oh yeah. I practice jiujitsu, and in Brazil I worked with [legendary fighter] Hoyola Gracie a little bit. Working with a guy like that will elevate your game with a couple of sessions.

Q: Who were the most tenacious fighters you faced?

A: They were all tough, but the people Doug trained with in Israel were tenacious to the point of psychotic.

A: Never. Learning a new style in five days and taking on a black belt is virtually impossible. You could get a general idea of w­hat the style was about and then it was time to fight. Seeing how we overcome it is pretty much what the show is about.

Q: How about a second season?

­A: I'd do a second season in a heartbeat. It was the experience of a lifetime.