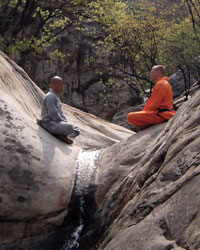 In China, Smith learns that not all training involves his fists.
Discovery Channel

The cultural side of the show is an important aspect of the appeal. Anderson and Smith trained and fought in some of the most beautiful settings on Earth. From Buddhist temples in the mountains of China to Aztec ruins near Mexico City, "Fight Quest" was as much about the locations and cultural traditions as it was the fighting. Anderson says:

"I love to experience new things and see new places -- try to understand new people. I think that was really one of my favorite parts about the experience. Not only were we going to new countries, but we were fully immersed into a specific part of that country's culture. I can't think of one country where I didn't absolutely love the cultural experience."

Anderson soon learned that the fighting styles were often a reflection on the country itself:

"Each country's style reflects their mentality in a lot of ways, which I thought was astounding. China was graceful, thoughtful -- not really a violent art. The Korean people were the most peaceful, calm, kind people I've ever met as a whole, and their art really reflects that. In Japan, the fighters were your typical kamikaze pilot. They'd just charge into the fight, giving it everything they had -- die on the mat if that's what it comes down to, but don't give up your honor. To get somewhat of a gauge on the national mindset from the way people punch each other is really amazing."

Capoiera, a mix of martial arts and cultural elements, being performed on the beach in Brazil.
Discovery Channel

­ It was in Israel where both Anderson and Smith had the most unnerving experience. Smith says:

"I've never seen people that literally walked around as if someone would jump out at them at any moment and attack them. To walk around like that your whole life, paranoid, was a hard mentality for me to understand. That's how they fought."

"My trainer would look around with almost a nervous twitch, like someone was sneaking up on her at all times. They're always ready for a fight, and always willing to do whatever it takes to win. Their fighting style is very much about watching over your shoulder and being ready for an attack from any direction, and that's the way their country lives. They're surrounded by enemies."­

In fact, the only time producers intervened was in Israel during Anderson's krav maga match. He explains:

"The only time I screamed in pain ever in my life as far as I can remember was in Israel. They wanted to show the world how powerful krav maga could be, and it got wild. In the end, I was in a ring with about 15 guys, and they were just sending dudes at me from different directions -- plowing me, kneeing me in the face, gouging my eyes. I really didn't know what to do. I hit his groin, but he had a [athletic] cup on so I couldn't hurt him. I fully believe that guy was trying to rip out my eyes. Somehow I managed to get out of it, but he wasn't going to stop. Because of the insanity of it, the producers stepped in and said, 'Hey, you need to calm down' and the Israelis were just like, '[expletive deleted]. We don't care what you say.' They just kept coming full force."

In the next section, we'll learn about what chicken blood and fire curry have to do with training methods.