Browse the article If Only 'Lost' Were Real -- Wait, Is It? 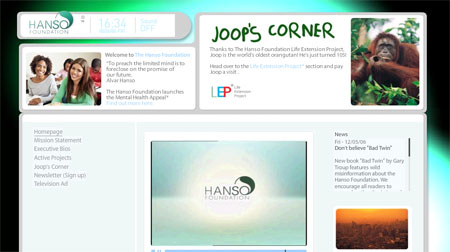 Okay "Lost" fans, you got hit with a doozy this past Wednesday, didn't you? For those of you who don't know, the action-drama wrapped up its second season earlier this week. In response to last season's let down, the writers and producers revealed some big developments in the plot I won't spoil here. Still, if you're not up-to-date on "Lost" viewing you may want to stop reading here.

During commercial breaks over the past few episodes, ABC has run advertisements for the Hanso Foundation, a fictional organization tied to the show's plotline...or is it? The network aired a live interview Wednesday with Hugh McIntyre, the Hanso Foundation's Communications Director, on "Jimmy Kimmel Live."

McIntyre insists that the foundation isn't involved with the show in any capacity. He claims the show's writers and producers have merely "latched" themselves onto their organization to build their mythology and there's no true connection. The commercials exist, he claims, to show "Lost" viewers that the connection is purely fictional. McIntyre does, however, confirm the Dharma Initiative's existence (it was called off in 1987 for reasons unknown to us.) He didn't give any further information about the Iniative because of the "proprietary technology" involved. Can you say hatches? I knew that you could.

Is it just me, or is the line between fiction and reality getting fuzzier? If all the Web sites -- TheHansoFoundation.org, the now-defunct SubLYMONal.com and others -- and Hugh McIntyre's TV appearance aren't enough, maybe Gary Troup's novel "Bad Twin" will convince you. The fictional author dies when Oceanic Flight 815 crashes into the island, but his manuscript survives. Eventually, the islanders find the manuscript among the plane wreckage. And now you can find the manuscript in a bookstore near you. You can buy the book and dig for clues yourself, but do yourself a favor and read the reviews before you open your wallet.

Here's something to think about: if the Hanso foundation is real, why aren't they upset about the show using their name with no retribution?

For more information, see the next page or do your own "Lost" detective work.