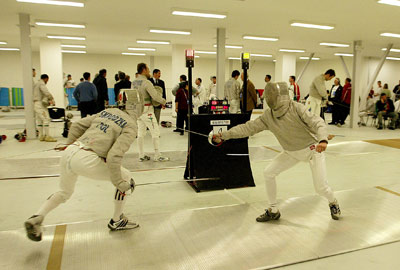 When most people think about fencing, they are reminded of swashbuckling movies such as "The Three Musketeers," "Robin Hood," "The Mark of Zorro," "The Buccaneer" or "The Princess Bride." In these movies, the hero fights by making broad sweeping motions with his sword and running about the stage or scene, and the winner is clear when one of the fighters is wounded or dies. But modern fencing is a sport with rapid, subtle movements and fast actions. Often the action in an engagement is over within seconds.

Because the actions are so fast in competition, judges would have a tough time scoring the competitors' hits. So to make the scoring fair, most competitions use electric scoring machines to detect touches. Even though the weapons are not sharp, modern fencers must wear special equipment for protection and scoring. In this article, we will examine the protective equipment as well as the electric scoring equipment used in modern fencing. 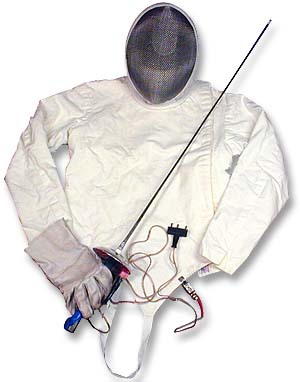 Here is the equipment for a competitor in foil/epee: a jacket, mask, glove, electric foil and body cord.

The protective equipment for each weapon is the same:

The fencers compete (bout) on a rectangular strip of floor that is 5.9 to 6.6 ft (1.79 to 2.01 m) wide and 46 ft (14.02 m) long. Each fencer has a cord attached to him, which is connected to a reel on each short side of the strip. Each cord is spooled on a reel and each reel is connected to the scoring machine. The scoring machine is on a table just off the middle of one long side of the strip. The machine has four lights (one white light and one colored light for each fencer).

On the other long side of the strip is the director. The director ensures that all equipment is safe, supervises the bout, starts and stops the action, observes and recounts the action, awards points and penalizes faults. A fencing bout lasts six minutes of actual fencing time, and is played until one player scores five points or until time runs out. In the case of a tie, play continues regardless of time until the tie-breaking point is scored. (To see a diagram of the fencing field of play, click here.) 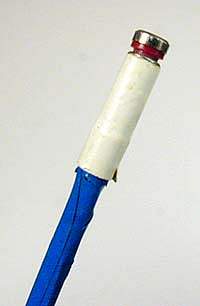 A foil is the modern version of a rapier. It is about 35-in (88.9 cm) long and weighs less than 1 lb (.45 kg). It is a point weapon, which means that only the point of the blade can score a valid touch. The target area for a foil is the torso (the area covered by the jacket), not including the head or arms. Any touch scored outside of the target area (off-target) is not valid. Foil is also a "right-of-way" weapon, which means:

For electric scoring, a foil fencer must have a metallic vest (lamè), an electric foil and a body cord. The lamè is worn over his jacket and covers the target area. An electric foil has a button on the end with three wires (A, B, C) running down the blade to a connector behind the bell guard -- the round, silver part of the foil that protects the hand. The body cord connects the foil and lamè to the reel. Also, the strip is covered with a metal grid called a piste.

For foil, there is a closed electric circuit set up by the system, which is opened when a touch is landed (the button on the foil is depressed); when a touch occurs, a buzzer goes off and a light lights up on the side of the fencer who was touched. The button must be depressed by 0.1 lb (0.5 newton) of force; this is tested before the bout by placing a 500-g weight on the tip of each fencer's foil and seeing if it triggers a light on the machine. The foil's A wire is connected with the target lamè, the B wire is the "hot wire," and the C wire is the return current; the piste and the bell guard are electrically grounded. When the foil (B) touches something, then one following situations can happen

After the lights go off, the director stops the action, recounts the last series of engagements, determines which fencer had right of way and awards the point. Often, lights go off on both players (simultaneous touches) and the director must sort out the action, determine if either player had right of way and award points, if one or both players made valid hits. In foil, no points are awarded if both players make simultaneous valid touches. Once the point has been awarded, the director moves the fencers to their starting positions and continues the action; if no point was awarded (for example, if there were an off-target touch), play resumes from where the touch occurred.

Epee is the modern version of the dueling sword; it is similar to a foil, but it has a stiffer blade, has a larger bell guard, and is heavier (about 1.75 lb, or .79 kg). Like foil, epee is a point weapon, but the entire body is a valid target. There is no right of way in epee. For electric scoring, a fencer needs an electric epee and a body cord. The electric epee also has a button and three wires (A, B, C).

For epee, there is an open circuit set up by the system, which is closed when a touch is landed. The B wire of the epee is hot, the A wire is the return current, and the C wire of epee is grounded, along with the bell guard and piste. If the epee touches the piste or the opponent's bell guard (B touches C), nothing happens. When a touch is landed (B touches A), the circuit is closed, a buzzer goes off, and a colored light lights up. There are no off-target hits in epee, so a point would be awarded. Also, fencers can score simultaneous touches in epee.

A sabre is the modern version of a cavalry sword and is similar to a foil in length and weight. It is a point weapon and a slashing or cutting weapon; therefore, the side of the blade can make a valid hit. The target area for a sabre is the everything above the waist including the head and arms. Because the hand and arms are valid targets for a slash, the bell guard of the sabre is also curved downward in front to protect the fingers. Sabre is also a right-of-way weapon. Electric scoring has been a recent innovation in sabre fencing. For electric scoring, a fencer must have a lamè that covers the torso and arms, a special metal mask, a metal overglove for the weapon hand, a body cord, and an electric sabre.

Like foil, the electric sabre system is a closed circuit that opens when a touch or slash is landed. In an electric sabre, the blade is hot (B,C) and the target lamè has the A connection. The bell guard and strip are grounded. When blade touches something, the same situations occur as described above for foil, except that off-target hits do not register on the machine and, therefore, do not stop the action. As in foil, no points are awarded for simultaneous valid touches.

Although the cord is designed to reel-out and reel-in as the fencers advance and retreat down the strip, it does present some restriction to a fencer's movement. For the fencer who competes with an electric scoring system for the first time, the tug of the reel can present a distraction. To make the fencer totally unencumbered, a reel-less, electrical system has been developed and was tested in the 2004 Athens Olympics.

The electrical circuit set-ups for foil, epee and sabre are the same. The body cord of the fencer attaches to a lightweight, transmitter-receiver pack, which is worn on the back at the waist. This pack is about the size of a cigarette pack and is much like those packs worn for portable microphones. This pack transmits radio signals to the electric scoring box with the lights. In addition to the wire system, a lightweight, clear, plastic (Lexan) mask with lights inside is also being tested for foil and epee. When a fencer is touched, lights light up inside his helmet as well as on the scoring box.

Thanks to Justin Meehan of Blade Fencing Equipment of New York, who contributed to this article with his advice and comments.