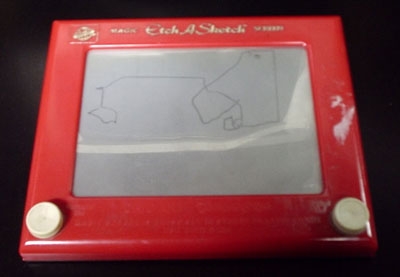 If you were born in the 1960s or 70s, you remember the Etch-A-Sketch®. It was the cool, amazing, must-have drawing toy for kids. It seemed like every kid had one. Today the Etch-A-Sketch has a retro feel. You would think it would have been replaced by the PC - given a choice, would a kid rather see the scratchy black line of a etch-a-sketch or the color of a digital crayon in a paint program? There are also things like Magna Doodle® that are a lot easier for kids to use. But the Etch-A-Sketch hangs on with a surprisingly large audience. There's something about those two knobs.

Where did the Etch-A-Sketch come from? The inventor's name is Arthur Granjean, and he lived in France. Ohio Arts bought the rights to the idea and manufactured the first Etch-A-Sketch on July 12, 1960 [Source: Etch-a-Sketch].

Like many other toys of that era (including the Superball, the Hula Hoop and the Frisbee), the Etch-A-Sketch became a phenomenon. Millions have been sold.

Visit Consumer Guide to get more ideas on creative toys for kids that can help spark their creativity.