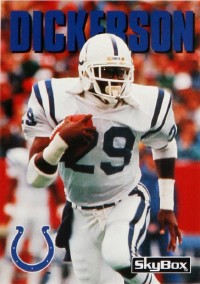 A No. 1 draft pick of the Los Angeles Rams, Dickerson wasted little time establishing himself as one of the NFL's premier running backs.

His Rookie of the Year performance, however, turned out to be just a prelude to an even more amazing sophomore season. That year, Dickerson accomplished the seemingly impossible when he broke O. J. Simpson's single-season rushing record of 2,003 yards set in 1973.

By gaining 215 yards against the Houston Oilers in Week 15, Dickerson bested Simpson's record by four yards. The record came on his 27th carry of the afternoon on a play called "47-gap." "We must have run that about 33 times today," Rams head coach John Robinson said after the game. "The blocking was there, the hole was there, and Eric was there." He added 98 yards in the season finale to make the new single-season record 2,105 yards.

Deceivingly fast, Dickerson had an unusual running style. He combined speed, a fluid motion, and power. "Every time Dickerson gets the ball," former New England Patriots head coach Raymond Berry said, "you don't breathe until he's tackled." Dickerson led the Rams to the playoffs in each of his first four seasons and claimed the NFL rushing title three times during the same period. In 1987, after a bitter contract dispute, he was traded to the Indianapolis Colts.

In five seasons with the Colts, Dickerson added three more 1,000-yard seasons for an NFL-record seven consecutive. When Dickerson retired in 1993, the six-time Pro Bowl choice ranked second only to Walter Payton with 13,259 career rushing yards.