Browse the article How the Emmy Awards Work 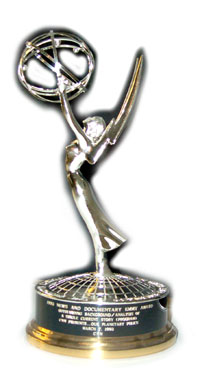 Television is such a big part of our lives. Almost every home in the United States (more than 99 million of them) has a television, and Americans, on average, watch about three hours of television a day. We sometimes plan our lives around our favorite shows. The popularity of TV has spawned cultural shifts as well as some great technology, such as VCRs, cable and satellite television, and high-definition TV.

Our love of competition finds an outlet in television, as well. We find it exciting to watch shows in which we don't know the outcome. When the Emmy Awards are announced, millions of people tune in to see how their favorite shows fare. A win can boost an actor's career or cause a show's ratings to skyrocket. Sometimes, an Emmy award can give a low-rated but well-made show a whole new lease on life. Back in the 1980s, NBC's "Hill Street Blues," a police drama series that was critically acclaimed but hadn't drawn a broad audience, won Emmys for acting, writing and best dramatic series. The show was saved from cancellation.

But just how do the Emmys work? Who nominates shows and performers, and who votes on those nominations? In this article, we'll take a look at the Emmys and explain what goes on before the envelopes are opened live on stage during the Emmy Award broadcast.

Why is it Called an Emmy?

A television engineer named Louis McManus designed the statuette, using his wife as a model. The Academy of Television Arts & Sciences (ATAS) says that the statuette represents the arts (a winged woman) and the sciences (an atom). Th­e first Emmys were given out in 1949. The original name for the award was the Immy, a nickname for the image orthicon tube, part of an early type of camera; but the academy began referring to it as the Emmy because that more feminine name suited the statuette. The R.S. Owens Co. of Chicago makes the Emmy statuettes. (This company also makes the Oscars, the awards given out by the film industry.) An Emmy is made of a high-grade pewter and electroplated in copper, then nickel, then silver. Finally, it's electroplated in 18-karat gold. It weighs 4-3/4 pounds (2.15 kg), and is 16 inches (40.64 cm) high. 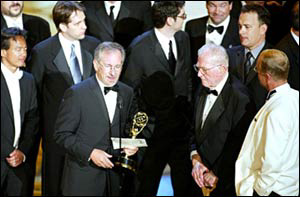 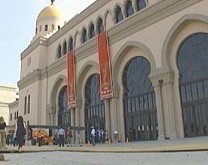 For more information on the Emmys and related topics, check out the links on the next page.