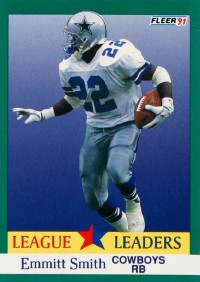 Emmitt Smith scored four touchdowns in the 1995 season  opener against the Giants,  including one on a 60-yard  burst. See more pictures of the greatest football players.

Emmitt J. Smith III excelled at football at every level. He was a consensus All-American running back and prep Player of the Year by Parade and USA Today as a senior at Escambia (Florida) High School.

At the University of Florida, where he was an All-American and three-time All-SEC selection, he established 58 school records in three seasons, including a career rushing mark of 3,928 yards.

Joining the Dallas Cowboys as their No. 1 draft pick in 1990, Smith (born 1969) was even more sensational. Almost immediately, he emerged as one of the game's greatest performers.

Though not exceptionally fast, Smith combined quick moves with the power of a fullback. No one was more determined to reach the end zone.

A Pro Bowl choice in each of his first six seasons, Smith is the only player in NFL history to rush for more than 1,400 yards in five consecutive seasons.

In 1995, he added to his ever-growing list of accomplishments when he set a new NFL mark for touchdowns scored in a season, with 25.

At the same time, he compiled a career-best 1,773 yards rushing. Hardly one-dimensional, his 62 receptions in 1995 marked the fourth straight season in which the versatile running back caught 50 or more passes.

How valuable is Smith to the Dallas offense? Well, while football is more than a one-man sport, the Cowboys through 1995 were 62-8 in games where Emmitt had 20 or more carries and 43-5 in games where he gained at least 100 yards rushing. His 20 postseason touchdowns are an NFL record.

The pinnacle of Smith's career as a rusher came on October 27, 2002, when he broke boyhood idol Walter Payton's all-time career rushing mark. Smith carried the ball for two more seasons before retiring at age 34 with 18,355 yards rushing.

When likened to Hall of Famers Payton and Jim Brown, Smith used the comparisons as motivation. "When my career's over," he would say, "I want to be able to say ... no, I want to have the new kids, the new backs, say, 'Boy, we have to chase a legend to be the best,' and they'll mean Emmitt Smith."