Elvis Presley's love songs are some of the most famous tunes of his career. Presley recorded "I Want You, I Need You, I Love You," written by Maurice Mysels and Ira Kosloff, in on April 11, 1956. The song reached the top ten of the pop, country, and rhythm and blues charts. It was the first ballad recorded by Elvis for RCA that was released on a single as the A-side.

Jerry Leiber and Mike Stoller composed the torchy "Love Me" in 1954 as a spoof of country ballads. On September 1, 1956, Elvis recorded it straight and with feeling, turning it into a serious love song.

Elvis recorded "Love Me Tender" in in the late summer of 1956 as the closing song for his first film, Love Me Tender.

Elvis recorded "It Hurts Me" in on January 12, 1964. The song was written by Joy Byers and Charlie Daniels, though Daniels is not always credited. Elvis recorded this song again for his 1968 TV special, Elvis, but it was not used.

"Until It's Time for You to Go" was written and originally recorded by Buffy Sainte-Marie in 1965 and was released by several artists before Elvis. Others who recorded it included Michael Nesmith (as Michael Blessing), the Four Pennies, and Neil Diamond. Elvis recorded this beautiful love song in in the early summer of 1971, and he sang it in the documentary Elvis on Tour.

Separate Ways
" was biographical in that Elvis and Priscilla had just separated. Fans and biographers have often interpreted the song as a reflection of Elvis' feelings. It was composed for him by Richard Mainegra and Elvis' longtime friend and bodyguard Red West.

Mark James, Wayne Carson, and Johnny Christopher composed "Always on My Mind" especially for Elvis, though other singers have had success with it. Elvis was the first to record it, on March 29, 1972, but Brenda Lee's version was released first. In 1982, Willie Nelson scored a number-one country hit with it, while the Pet Shop Boys recorded a version in 1988.

Elvis recorded "It's Midnight" at legendary Stax Records in on December 10, 1973. It was written by Billy Edd Wheeler and Jerry Chestnut.

The most well-known version of "Unchained Melody" was released by the Righteous Brothers in 1965, though it was written in 1955 for the movie Unchained. Several performers recorded it in the 1950s, including Les Baxter, Roy Hamilton, Al Hibbler, and June Valli. Elvis sang this earnest love song in concert during the 1970s, and he recorded performing it live in , on April 24, 1977. It was released posthumously.

Elvis was credited as coauthor of this love ballad, though it was actually composed by Ken Darby, who served as the vocal supervisor on the film. Darby's wife, Vera Matson, also received credit. The song was based on a ballad from the Civil War era called "Aura Lee" (sometimes spelled "Aura Lea"), which was written by W.W Fosdick and George R. Poulton. "Aura Lee" became a favorite of the Union Army.

Almost 100 years later, the song became a favorite again with the public, this time reincarnated as Elvis' "Love Me Tender." Elvis' single release of the song achieved a first in music history when it received advance sales of over 1 million copies. The movie version of the song had slightly different lyrics and contained an additional verse. Elvis had always admired pop crooners such as Dean Martin, and "Love Me Tender" afforded him the opportunity to affect their gentle tones. 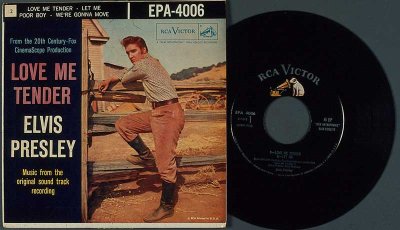 "Love Me Tender" was based on a Civil War-era ballad called "Aura Lee."