Whatever social and cultural effect Elvis may have had, it was his music that made the most profound impact. From the beginning of his musical career, Elvis had a unique sound and a way of reeling his audience in. His unstoppable charisma, coupled with a sound that was unlike anything America had heard before, made him a driving force in music for decades, even after his death. 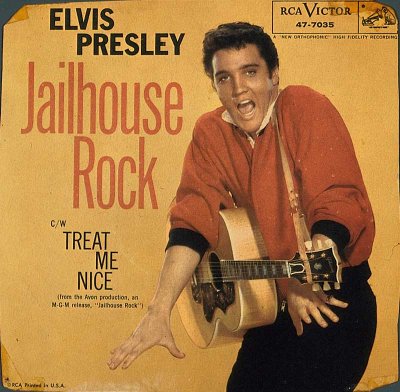 In Jailhouse Rock, Elvis managed to keep the spirit of his early rock 'n' roll style along with the quality that marked his early movie soundtracks. See more Elvis pictures.­

A mixture of indigenous American styles and sounds, Elvis' innovative rockabilly remains as fresh now as it was in 1954. Elvis managed to strike just the right balance between blues, rhythm-and-blues, and country -- along with a sound that was purely his own -- to form the core sounds of rock 'n' roll. His music captured the imagination of a young generation eager to strike a different tone than their parents had done.

Throughout the 1960s, Elvis focused his music mainly on making movie soundtrack albums. Though much of the material was not of superior quality, there were still enough gems to keep Elvis' sound alive and thriving on the charts.

By the 1970s, Elvis had left the movie business behind and returned to his first love, making great music. His later pop stylings may have become grandiose and exaggerated, but they still echo the sounds of the South...gospel, country, and rhythm and blues.

The many faces of Elvis -- rock 'n' roll rebel, Hollywood star, concert hero -- are reflected in the dozens of albums he made. The pages of this article explore a few of the best Elvis Presley albums in depth, and the final page offers a chronological list of Elvis albums. From rock to country, blues, gospel, and even Christmas music, there's an album here for everyone to love.