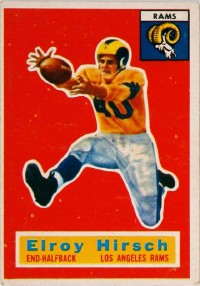 In 1951, Elroy Hirsch, the Los Angeles Rams receiver, enjoyed perhaps the greatest season of any pass catcher in history. Although modern receivers have surpassed his totals-66 catches, 1,495 yards gained, and 17 touchdowns--Hirsch put up those numbers in a 12-game season.

His longest play came against the Chicago Bears in a must-win game for the Rams. Trailing 14-0 and backed up against their own goal line, the Rams called on Hirsch. He simply outran the Bears' defensive backs, took quarterback Bob Waterfield's pass in stride, and continued on his way to a back-breaking 91-yard touchdown. The Rams beat the reeling Bears 42-17, an important step on their way to the 1951 NFL championship.

Ironically, Hirsch (born 1923) had been considered a disappointment in his first years as a pro. An All-American halfback at both Wisconsin and Michigan, he earned the nickname "Crazylegs" for his unique running style. In 1946, he joined the Chicago Rockets of the newly formed All-America Football Conference.

The young league hoped to challenge the established NFL with new stars such as Hirsch. But for three years, injuries ruined his seasons, the worst being a life-threatening fractured skull. When he signed with the Rams in 1949, he was thought by some to be washed up.

In 1950, Rams coach Joe Stydahar shifted Hirsch to end, and, after one season learning his new position, he exploded as a superstar. Even Hollywood jumped on his bandwagon, casting him as himself in the biopic Crazylegs.

He handled acting well enough to be given the lead in the non-football film Unchained, best known for its haunting theme song "Unchained Melody." Hirsch retired after the 1957 season with 387 receptions for 7,029 yards and 60 touchdowns.