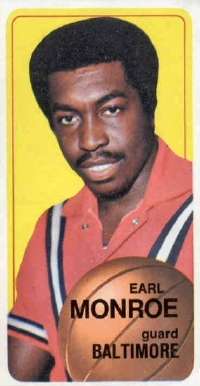 Earl Monroe razzle-dazzled around def- enders, took off toward the basket, and tossed up so-called "flukey-duke shots." See more pictures of basketball.

Earl Monroe was the Doctor before Julius Erving and Magic before Earvin Johnson, but most people called him "Earl the Pearl." He was the 1968 NBA Rookie of the Year with the Baltimore Bullets and an integral part of the New York Knicks' 1973 championship team.

He averaged 18.8 points over 13 NBA seasons and became a cult hero. Film director Woody Allen likened him to Marlon Brando. "The audience never knows what will happen next," Allen told Sport magazine. "The potential for a sudden great thrill is always present."

Born November 21, 1944, in Philadelphia, Monroe first took to soccer before switching to basketball after suffering a broken leg. A 6'2" center in high school, he developed a repertoire of trick shots to counteract bigger players. He didn't learn a jump shot until after high school; and even in the pros, outside shooting remained his weakness.

He enrolled at Winston-Salem State College in North Carolina in 1963, where he was coached by the legendary Clarence "Big House" Gaines. As a senior, Monroe averaged 41.5 points a game and led the Rams to the NCAA college-division championship.

Selected by Baltimore with the second pick of the 1967 NBA draft, Monroe needed only two seasons to lift his team from last place to first, and two more to send the Bullets to the 1971 NBA Finals, where they lost to Milwaukee.

Monroe twisted, spun, dipped, darted, and double-pumped his way into the upper echelon of NBA guards, averaging 23.7 points in four seasons with Baltimore. Early in the 1971-1972 season, after he asked for a trade, the Bullets sent him to the Knicks.

Monroe took a while to adjust in New York, where he was forced to defer to established veterans such as Walt Frazier, Willis Reed, Dave DeBusschere, and Jerry Lucas. In the 1972-1973 season, with Monroe supplying 15.5 points a game, the Knicks won the NBA championship, beating the Los Angeles Lakers in the Finals.

Monroe's scoring increased in subsequent seasons after Reed and DeBusschere retired. Bad knees and advancing age forced him to retire in 1980. He was elected to the Hall of Fame in 1989.