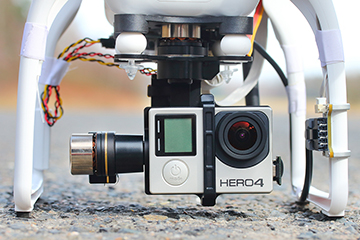 With the right equipment -- like this DJI Phantom 2 quadcopter and GoPro Hero4 camera -- you just might make the next great piece of cinema.
abadonian/iStock Editorial/Thinkstock

You know an innovation has moved from trend to full-fledged "thing" in the world of film and video when it gets its own festival. Claiming to be the first of its kind, The New York City Drone Film Festival debuted March 7, 2015. The screening took just two hours as a series of carefully selected shorts took viewers from the towering spires of Mont St. Michel on the coast of France to the turquoise waters of the Galapagos [source: Francescani].

While the bulk of these shorts were, in essence, documentaries, there was also a jaunty fictional short called "Superman with a GoPro." As the title indicates, we get the man of steel's POV as he speeds over cityscapes and landscapes on his mission to return a misplaced camera.

In one particularly haunting work called "The Fallout," a drone camera sails through the ghost town of Chernobyl. While radiation levels have fallen low enough that the nuclear disaster site has in recent years become a destination for tourists, the film has the feel of sci-fi poetry in which a robot camera surveys the ruins of a post-human future.

Speaking of the future, "The Fallout," taken together with the incredible footage of the Icelandic volcano mentioned in the intro, could point to at least one direction for the future of drone cinematography. That's the direction in which humans dare not venture. Hollywood has, so far, used drones as substitutes for helicopters and cranes. That means they take the kinds of shots we've come to expect from big budget films, only more safely and cheaply.

The full potential of drone cinematography has yet to be explored and will truly come of age when we see more unexpected and exciting footage like that taken by Eric Cheng at the Bardarbunga Volcano. Like that volcano, drone cinema will be both disruptive and creative. One way or another, it's certain to have a major influence on the future of film.

Near the end of his article called "How I Accidentally Kickstarted the Domestic Drone Boom," Chris Anderson talks about a product his company is working on — the idea is to make it possible to document your feats of derring-do with a drone. If you want to, say, scale a cliff-face and have the adventure captured for posterity, a drone mounted camera would hover at a pre-programmed distance, filming non-stop. It's not hard to extrapolate from this a future in which people walk around with a personal drone hovering nearby documenting their every move. At last, those who always dreamed of living inside the movies of their lives will get their wish.