Droning in the Real World 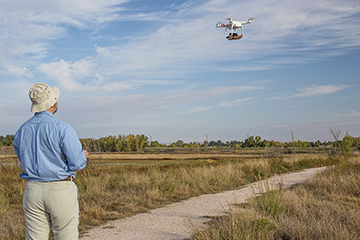 Whether you're a hobbyist or a professional cinematographer, you have to follow the FAA's rules when it comes to piloting your drone-camera combo.
marekuliasz/iStock Editorial/Thinkstock

When productions like "Skyfall" have used drones, they were shooting in countries where it was legal to do so. In the U.S., it was illegal until the Federal Aviation Administration (FAA) ruled on drone cinematography in September 2014. Thanks to an application from a group of aerial photography companies, the FAA granted a waiver to six production companies to use UAVs. But even with these waivers, the rules are strict. Only certified pilots can guide the drones, they can't go higher than 400 feet (120 meters), can't film at night and must notify the FAA in advance so local air traffic control can be warned [source: Johnson].

For the hobbyist who wants to record drone footage for non-commercial purposes, the rules are similar. Although you don't need certification, the 400-foot (120-meter) ceiling applies, and if you're within 5 miles (8 kilometers) of an airport you must notify the FAA. The website Know Before You Fly offers clear guidelines and suggests checking with local authorities since the laws and ordinances that govern this kind of activity can vary from region to region. And make sure to do the same if you're planning to film abroad. To get that footage of the volcano in Iceland, for instance, Eric Cheng had to clear a few local bureaucratic hurdles first.

There are other restrictions besides the legal ones. As yet, the battery life for a typical drone isn't very long. In fact, it can be as short as three minutes if the drone is toting a heavy camera [source: Watercutter]. There's also the problem of learning to fly a drone so that it can shoot good footage. It can take quite a bit of practice to be able to control the machine well enough to have it stay focused on what you want to film while keeping the shot steady and smooth. By some accounts, however, a background in gaming is an asset.

If you already have a GoPro camera, you can buy a good drone for $600 or $700 and get started. For a few bones more, some drones now come with cameras attached [source: Popper].