Origin of the Drones 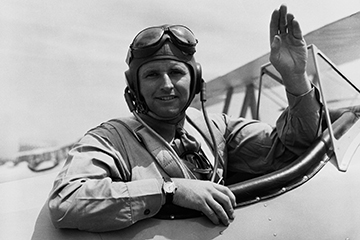 Joseph Kennedy was piloting an early-model drone when it exploded over Suffolk, England, in 1944.
Bettmann/CORBIS

England, 1944: U.S. Navy pilot Joseph Kennedy guides his plane toward the continent on a mission to bomb a Nazi research facility. The plan is that once he reaches a predetermined altitude, he'll abandon the plane and parachute to safety. A "mothership" will then take over control of the aircraft, piloting it by remote radio-control until it crashes into its target and explodes. Tragically, Kennedy's plane explodes prematurely in mid-air over Suffolk before it even crosses the channel. Kennedy dies in the explosion, some 16 years before his younger brother becomes president of the United States [source: Sifton].

The quasi-drone Kennedy was piloting was part of the military's long evolution of unmanned aerial vehicles (UAV). Intriguingly, not only was he flying a proto-UAV, but the Nazi research facility it was aiming for was dedicated to building the older cousin of the UAV, the rocket. After the war, the U.S. recruited Nazi rocket scientists to help develop American missile technology. Thanks in part to America's success with rockets, UAV research slowed down until the Vietnam War. But because of miniaturization of the necessary technologies, together with concerns about pilot safety, military use of drones began to increase rapidly in the 1960s [source: Sifton]. Now, nearly 1 in every 3 planes used by the U.S. Air Force is a drone [source: Ackerman].

The miniaturization and proliferation of digital technology is the key element that has made the 21st century explosion in drone use possible. According to Chris Anderson, former editor-in-chief of Wired magazine and cofounder of 3D Robotics, civilian use of small drones essentially took off when hobbyists realized they could use smartphone technology to control small UAVs. What started as a do-it-yourself geek-fest has rapidly turned into a growth industry as everybody from climate scientists to search-and-rescue professionals to parcel delivery companies realized how useful a drone can be.

Just how popular is this hobby? Anderson says that as of 2012, his customers alone were flying more drones than the entire U.S. military [source: Anderson].