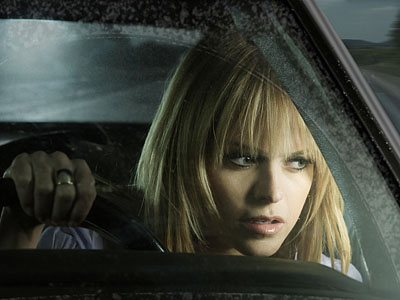 Ivy Chitty (Taryn Manning) is a Hurricane Katrina survivor who plans to use her race winnings to help rebuild her city.
Photo ©2007 Fox Broadcasting

"Drive" employs another state-of-the art tool to establish where the competitors are in the race: satellite graphics. "Google Earth was definitely an inspiration for it. Our world is GPS; it's a way we understand where we are," notes Peristere. "We've made a deal with a satellite company and we're using real satellite images and we're painting them to take their resolution up so they work for broadcast television."

Pinpointing where the characters will be in the story at the end of the initial 13-episode run is a bit more of a mystery. Minear promises that there will be "a natural stopping point at 13, "and then if we get picked up we'll finish the first race. I don't want the audience to feel like they've wasted their time. After that, there are ways to roll cast members into another race, give them another function. You find out some people were working for the race. Some people will die if they don't behave. Some people will lose. Some people will win and new people can be added at any time. The race will evolve, the players will evolve, and the things that they're racing for can change."

That kind of fluidity has marked "Drive" from the start, since the original pilot was scrapped along with most of the cast. "It's the same story, we're just getting into it a bit differently," Minear explains. "In the original pilot we started on the road, and we didn't really visit the worlds from which these people came. In the new version we do so we're more emotionally connected to who they are. They're just much more clearly defined characters."

"He's just an average guy who's being forced into something that he doesn't actually want to do," Fillon sums up Alex, who is presented with a dire ultimatum: win the race or his wife dies. "Alex's past, which will be revealed over the course of the episodes, will figure prominently into why he was chosen and who chose him," notes Minear. "Every character has either a desperate reason or a mysterious reason that will be revealed over the course of episodes." Adding to the mystery, "There's something that each of them can do, and it's not always necessarily the thing that seems apparent on the surface."

Alex Tully (Nathan Fillion) is forced to participate in an underground cross-country road race to save his wife.
Photo ©2007 Fox Broadcasting

If this all seems rather Machiavellian, it's by design. Unseen puppet masters are pulling all sorts of strings. "Did you ever see that Michael Douglas movie "The Game"? There's a certain element of that to it," references Minear. "There are people behind the curtain that are either allied with or working against certain teams. Sometimes they may seem benevolent, other times they may seem bad. There are monitors along the way, and some people are in their pockets," Minear continues.

He and Queen also took care to avoid being influenced too much by "The Amazing Race," though "there will be certain crossover elements," concedes Minear, who became hooked on the reality show after watching a set of DVDs. Queen says he was more inspired by road movies like "The Gumball Rally" and "Two-Lane Blacktop," but found them emotionally lacking and narrow in scope. "This is the car-chase movie that I never got to see."

For lots more information on "Drive" and related topics, check out the links in the next section.

Loni Peristere's Zoic Studios worked on the upcoming movies "Pathfinder," "Vacancy," "One Missed Call" and "The Sarah Connor Chronicles" TV pilot, a Terminator spinoff, for Fox. He also supervised visual effects on the independent movie "One Day Like Rain."

Nathan Filion co-stars with Keri Russell in the independent romantic comedy "Waitress," due out in limited release May 4.

Kevin Alejandro is currently doing double duty, recurring as Santos on "Ugly Betty." He'll be seen later this year in the horror movie "Hunter's Moon" and in a comedy, "Strange Wilderness." "I drive a '69 Impala in that too," he says.

Melanie Lynskey is in the ensemble cast of CBS' western miniseries "Comanche Moon," slated to air in November. She has a cameo in the comedy "Big Stan," due out in August.

Taryn Manning has several films in the can, including the thriller "The Speed of Thought," the '70s-set "Your Name Here," "Jack and Jill vs. the World," a romantic comedy with Freddie Prinze Jr., and the horror flick "The Last Resort," due out in August. "They're all so different, so the 'edgy Taryn' stereotype is broken," she says. Manning is also working on a solo album.