by the Editors of Publications International, Ltd. Jul 31, 2007 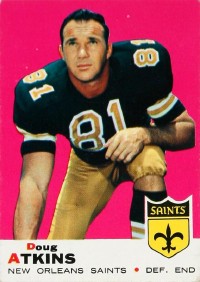 Doug Atkins's size, speed, and temper made him a formidable opponent. See more pictures of football and football players.

One day, a rookie offensive guard held Doug Atkins at the line of scrimmage and got away without a flag. A veteran tackle from his team pulled the rookie aside. "I've got to play against him the rest of the day," the tackle yelled. "Now you go apologize!"

At 6'8" and 275 pounds, he could blot out the sun for a quarterback attempting to pass. If a blocker hazarded in front of him, he might leap over him in a single bound or pick him up and throw him at the quarterback. But, if he was angered, he might really get serious.

Doug originally went to the University of Tennessee on a basketball scholarship, but once the football coach saw his combination of size and agility, he was recruited for the grid team.

After he earned All-American honors as a defensive tackle, the Cleveland Browns made him their first draft choice in 1953.

An outspoken free spirit, Atkins was not Cleveland coach Paul Brown's kind of player. After two seasons, he was traded to the Chicago Bears, where he clashed with Bears owner-coach George Halas.

Once, after some disagreement at practice, Halas told him to run laps and, to make it particularly uncomfortable on a hot day, ordered Doug to wear his helmet. When he looked up, Halas saw Atkins running his laps wearing his helmet -- and nothing else!

Despite occasional explosions, Halas put up with Atkins for 12 seasons because the big guy was such a defensive force. Atkins, who was an All-NFL three times and named to eight Pro Bowls, was a key part of the great Bears defense that won the league championship in 1963.

Finally, in 1967, Atkins was traded to New Orleans, where he finished his career. After Atkins retired, Halas admitted, "There never was a better defensive end."