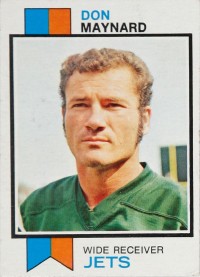 Don Maynard, the record-setting receiver, took an odd road to stardom. It all began with four productive years at tiny Texas Western College, where he was a two-time All-Border Conference halfback and a track star.

Maynard was signed by the New York Giants in 1958 but was released after just one season. He then joined the Canadian Football League's Hamilton Tiger-Cats for the 1959 season.

When the American Football League was organized in 1960, Maynard (born 1935) returned to New York with the Titans, a team that would later change its name to the Jets.

Don was the first player to sign with the Titans and couldn't have been more pleased with the philosophy of coach Sammy Baugh, who loved to throw the ball.

Maynard responded with 72 receptions for 1,265 yards. The Titans and later the Jets struggled for several seasons before they attained any level of respect.

Maynard, never a precise pattern runner, often had to "improvise" as one of his team's constantly rotating corp of quarterbacks scrambled for his life.

Not until 1965, when quarterback Joe Namath arrived on the scene, was Don able to develop any sense of quarterback-to-receiver chemistry.

That chemistry proved to be the perfect mix in the 1968 AFL title game against the heavily favored Oakland Raiders. The Namath-Maynard combo picked apart the tough Raider defense seemingly at will. Maynard, even though nursing an injury, caught six passes for 118 yards and two touchdowns.

"That's the one I'll never forget," Maynard said. "If we hadn't won that day, there would have been no Super Bowl III for us."

His 633 career catches for 11,834 yards were both pro records. Named to the all-time AFL team in 1969, Maynard was accorded the game's highest honor in 1987 when he was elected to the Pro Football Hall of Fame.