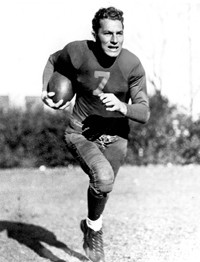 Don Hutson sprinted toward the end zone as Green Bay's tailback faded back to pass. Four Chicago Bears guarded Hutson as they neared the big "H" goal posts then set on the goal line.

They all crossed the goal line on the dead run, but Hutson's arm shot out and hooked the upright. His body twisted and suddenly he was trotting by himself, in a direction 90 degrees from his previous path. The four Bears were still scrambling to stop their momentum as the Packer passer lobbed a touchdown to a wide-open Hutson.

Once the ball was safely cradled, Hutson's speed and dodging wizardry made him a good bet to score. Then he'd often kick the extra point. From the moment he arrived in Green Bay in 1935, after making All-American at the University of Alabama, Hutson was the NFL's premier receiver.

In one quarter of a 1944 game, he caught four TD passes and kicked five PATs for 29 points.

Longer seasons and more pass-oriented offenses have helped many modern receivers surpass Hutson's career marks, but when he retired after the 1945 season, his 488 receptions were 200 more than anyone else had. He set an NFL career record with 99 touchdown catches, still a sensational mark.

Hutson played in the backfield on defense for much of his career, intercepting 30 passes during his last six years in Green Bay. In 1963, Don was named a charter member of the Pro Football Hall of Fame.