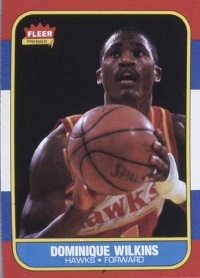 Dominique Wilkins was known as the "Human Highlight Film" for his explosive point bursts on the court. See more pictures of basketball.

No matter what Dominique Wilkins did on the court during his 13 years in the NBA, people always talked about what he didn't do, which was to win a championship. In fact, he never even played in the NBA Finals. But the man known as the "Human Highlight Film" had a remarkable career, amassing 25,389 points, nine All-Star Game selections, two Slam Dunk titles, and one scoring crown.

Wilkins was a veritable point machine, unmatched in his ability to run the floor and take over games with his explosive bursts. His signature was a spin move from the left side into the middle for a runner, but he also loved to pull up and take his jump shot on the fastbreak. Unfortunately, said his critics, he ignored the little things, like passing, rebounding, and defense.

Wilkins was born January 12, 1960, in Paris, France, while his father served in the U.S. Air Force. He attended high school in North Carolina, then attended the University of Georgia, where he became the Bulldogs' all-time leading scorer. Leaving school after his junior year, he was selected by the Utah Jazz in the 1982 NBA draft, then traded to the Atlanta Hawks.

By his third season, Wilkins had established himself as an elite scorer with 27.4 points per game, sixth in the NBA, and remained in the top 10 the next nine seasons, his average never dropping below 25.9. He won the 1985-86 scoring title, edging Adrian Dantley, with a 30.3 average. The Hawks made the playoffs eight times during his tenure but never reached the Eastern Conference finals. They came closest in 1988, when Wilkins and Boston's Larry Bird engaged in an epic fourth-quarter shootout in the seventh game. The Celtics prevailed despite 47 points from Wilkins.

A torn Achilles tendon threatened Wilkins's career in 1992, but he returned to average 29.9 points the following season. The Hawks dealt him in February 1994 to the Los Angeles Clippers, with whom he played just 25 games before signing with Boston. His stay in Beantown was brief, too. One year after joining the Celtics, he signed to play for a team in Greece.