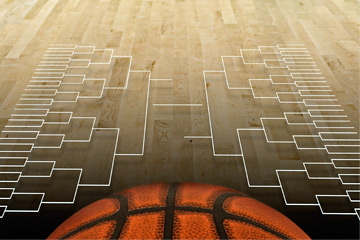 It's March. Time to fill out a bracket and – get a vasectomy? See more basketball pictures.
Hemera/Thinkstock

March Madness and vasectomies: a marriage made if not in heaven then at least at CBS Sports and Turner. A snip here, a snip there, and before you know it, you're on the couch, an icepack between your legs, watching your brackets get busted. It's the ultimate male excuse to watch hoops. "Honey, I need to lie on the couch for a few days, ice my you-know-what and watch sports. Doctor's orders. Can you bring me a beer and the Tylenol Extra Strength?"

Your significant other isn't going say peep about your sloth, because, well, you're in a lot of pain. Moreover, it also spells the end of other birth control methods -- eventually. What better time to schedule the end of your procreating manhood than during mid-March when the NCAA basketball tournament is in full swing?

Although there's no hard evidence to suggest that doctors perform more vasectomies in March, many men are scheduling them during this time of the year. Do the math. For a couple of days, we men can sit in our man-caves and watch March Madness unfold in all its glory. That's right. We don't have to go to work, take out the garbage, go food shopping or visit the in-laws. The remote is ours. Long live Gonzaga!

Urologists are more than happy to accommodate. Take Massachusetts, which has never had an NCCA women's or men's basketball champion, unless you count the men's Holy Cross win in 1947. The good people at the Urology Associates of Cape Cod in Hyannis have offered patients a coupon for a free — hold on to your loins — pizza after their vasectomy. About 30 people had signed up for the procedure and pizza during the first week of the 2013 tournament. Having offered this special more than once, the docs noticed that they tend to get 100 appointments during March Madness, about four or five times the practice's regular volume [sources: Brooks, Savedge].

In Elgin, Ill., Urology Ltd. has a "3-Point Shot" plan, where patients can not only get a vasectomy but also a free pizza and a free weekend pass to watch college hoops.

"The whole idea of the ad is to capture those guys who were thinking about watching the games anyhow and were also thinking about getting a vasectomy," Dr. Timothy Roth of Urology Ltd. told a local newspaper [source: Fox News].

For those who don't know what a vasectomy is, let's open our "Too Much Information" file. You might want to sit down and cross your legs. I am. A vasectomy is a male form of birth control, which is nearly 100 percent effective. During a vasectomy, doctors do one of two things to block the vasa deferentia, the two tubes that carry sperm from the testes to, eventually, the penis. When those passageways are completely sealed off, which takes some time after the procedure is over, the man can't get a woman pregnant. That's because there's no sperm in the ejaculated semen [source: Planned Parenthood].

In one method, doctors cut a small nick on each side of the scrotum and then remove a small section of the vasa deferentia. Then they tie the ducts, cauterize them or close them with surgical clips. The other, no-cut method is largely the same, except you're looking at puncturing the tubes and not cutting the scrotum [source: Planned Parenthood]. Whatever method you choose, and you can take this to the bank, you'll feel pain.

How much pain? Like the jerk that I am, when I had my procedure done (please don't tell my mother, she wants more grandkids), I decided to schedule my vasectomy on the same day I went to see "Les Miserables" on Broadway. The pain was so intense that by the final act (spoiler alert!) I wanted to dive off the bridge with Inspector Javert. If I had presence of mind, I would have scheduled my operation during March Madness.

So, back to our original question: Do vasectomies increase during March Madness? It depends on where you're from (and perhaps on the strength of your local college basketball team). At the Cleveland Clinic, doctors say they are doing 50 percent more vasectomies during the NCAA tournament than they did a couple of years ago [source: Kovanis]. On the other hand, doctors at the University of Minnesota's department of urology say they haven't seen a dramatic uptick. However, several patients have said they plan to use their downtime to watch sports on TV [source: DePoint].

The idea of marketing vasectomies isn't new. Apparently, a urology center in Oregon ran a "Snip City" March Madness promotion in 2008. Doctors offered their patients a "special recovery kit" that included an issue of Sports Illustrated, a T-shirt and a cooler to keep adult beverages frosty during the recuperation period [source: Savedge].

We want you to be fully informed, of course. Read How Vasectomies Work to get the full scoop on the specifics of the procedure, along with related information on pain medication, insurance coverage, cost and more. In case you ever change your mind, there's always this article, too: Can vasectomies actually be reversed?