Did Charles Manson audition for 'The Monkees'? 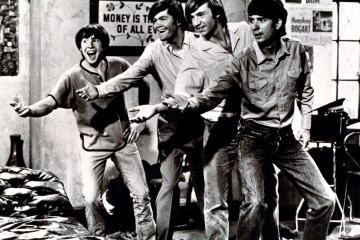 The Monkees were a very popular band decades a go, but they could have easily had a different trajectory if just one casting call was different.
King Collection/Photoshot/Getty Images

Los Angeles, 1965: Hundreds of eager, fresh-faced young men are lined up for an audition, guitars slung across their backs. They're all answering an ad looking for "folk & rock musician-singers" and "four insane boys, age 17-21" for acting roles in a new TV series called "The Monkees." But one among them doesn't quite fit the bill, except maybe in the "insane" department. He's a disheveled 30-year-old ex-con with a decidedly unstable look in his eye. It's Charles Manson, who would go on to become one of the most notorious cult leaders and murderers in American history. Yep, Manson wanted to be a Monkee, too.

Amazing story, right? It's kind of mind-boggling to think about what would have happened if Manson had become a Monkee. The band certainly would have had a different dynamic with Manson in the wholesome Davy Jones role. Would he have eventually sucked Peter Tork, Micky Dolenz and Michael Nesmith into his "family," leading them on a murderous spree during season four? Maybe Manson would've become a teen heartthrob, corrupting millions of innocent young girls with subliminal messages in hit songs like "Last Train to Clarksville" and "Daydream Believer." The possibilities are really endless. American culture might have totally changed (and many lives may have been lost) if Manson had gotten that gig.

Except, the story isn't true. Not only was Manson almost a decade too old to audition, but he was also locked up in prison at McNeil Island Corrections Center in Washington State at the time. So, case closed. It's just another one of those amusing show-biz urban legends that float around and never quite go away. No one's ever totally sure how they start; certain rumors just take hold for some reason. But there's something else that's a little off about the whole thing -- Both Dolenz and Jones took credit for starting the rumor.

Snopes.com, which generally has the last word in the urban legend department, states that the Manson-Monkees story does not have a definitive origin. But in December 2014, Dolenz said that he jokingly made up the story years ago during an interview on a Los Angeles radio show, the host of which was Jones' stand-in on "The Monkees." Problem is, Jones apparently told a similar tale in 1999 to FlashNews.com, claiming that he had jokingly made up the story during an interview.

Jones died in 2012, so he isn't able to defend his claim. We don't, and most likely never will, know if Dolenz has been confronted with the news that Jones might have one-upped him with the Manson-Monkees story. But maybe it's OK if both of them wanted to lay claim to the title of starting one of Hollywood's most enduring urban legends. Who wouldn't?

How Spikeball Works
Dear Tony Robbins, THIS Is How You Walk on Hot Coals
10 Canceled TV Shows That Came Back