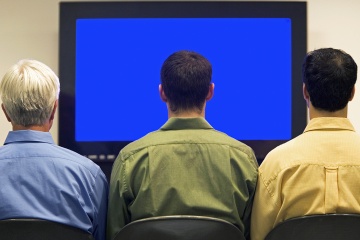 Cable TV is ubiquitous now, but it hasn't always been that way. In fact, the medium has enjoyed a steady climb in popularity over the past half century.
Fuse/Thinkstock

Long before Kim Kardashian's backside threatened to break the Internet, "The Walking Dead" was breaking cable TV. The show's October 2014 season 5 premiere set a new ratings record as the "most watched cable show of all time," an achievement that begs the question: Where would we be without our cable TV?

Even if you're not among the 22 million American viewers who decided to catch up on the latest storyline concerning their favorite neighborhood zombies, cable TV is probably a part of your daily repertoire [source: St. John].

So who's behind the curtain, delivering all these shows to your television screen? It's a cable TV company, providing programming through a system that includes transmission, reception and control equipment. Cable TV companies sell their programming to subscribers by offering a variety of packages at a variety of price points. Typically, these packaged channels — known as tiers — include basic service, cable programming service or pay-per-view service.

Basic service is just like it sounds: no frills. With this tier, a subscriber will receive television broadcast signals of the big four networks — ABC, CBS, NBC and Fox — as well as public, education or government access channels as required by an agreement between the cable TV provider and the municipality in which it operates.

Additional cable tiers, such as bundles of movie channels or sports channels, will elevate the cost of a subscription. A variety of individual channels or individual programs, such as pay-per-view sporting matches, can be purchased for separate fees.

Cable TV, initially known as Community Antennae Television (CATV), may be growing more complex, but it has existed in a smattering of off-the-beaten-path towns in Europe, Canada and the United States since the 1940s. The communities were located too far from TV stations to receive broadcast TV signals, so cable TV operators used antennae to picked up the broadcast signals and channel them through coaxial or optical fiber cables to subscribers, usually for a fee. By the 1950s, approximately 70 towns in the United States were watching TV via cable systems. In 2011, that number had blossomed to more than 34,000 communities with some 60 million paid subscribers. By 2014, TV cable companies were in every state in the United States and nearly every far-flung corner of the world [source: FCC].

And it's not getting any less expensive. Cable TV companies are built on a for-profit business model and the average cable subscriber is paying a six percent increase year-over-year for the same level of services. At least one market research company predicts the average cable TV bill will reach $123 by 2015 and top the $200 mark by 2020 [source: NPD].

As monthly cable rates continue to increase, some subscribers are opting for less expensive on-demand streaming services and canceling or scaling back their cable TV subscriptions. From 2000 to 2014, the number of households in the United States that cancelled cable or satellite TV in order to stream shows via the Internet grew by 44 percent [source: Experian].

While cable TV companies don't show signs of losing their staying power anytime soon, these emerging markets could impact the way they do business in the future. For now, though, most Americans — and people living in many countries throughout the world — rely on TV cable companies for their viewing pleasure.

10 Spin-off TV Shows That Made It Big
Do TV actors get paid in royalties?
Why are singing shows so popular?