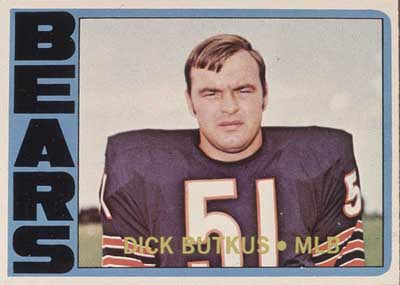 Dick Butkus was a terror on defense and had a huge desire to punish ball carriers. See more pictures of football players.

Dick Butkus is at or near the top of everyone’s list when it comes to football's greatest middle linebackers. When they say All-Pro middle linebacker," the Chicago Bears standout once remarked, "I want them to mean Butkus."

Consumed with the idea of being the best, Butkus (born 1942) admittedly played every game as if it were his last. No one ever played with more intensity.

His nine years of outstanding play with the Bears earned him All-Pro recognition seven times as well as eight Pro Bowl invitations. He was even voted by a panel of NFL coaches as the one player they would want to have to start a new franchise.

A two-time All-American at the University of Illinois, Butkus was drafted by the Bears in the NFL as well as by the Denver Broncos of the rival American Football League. Desirous of playing in his hometown of Chicago, he signed with the Bears. From the very start, he was a fan favorite. "The day he reported to training camp," his predecessor at middle linebacker, Hall of Famer Bill George, once reflected, "I knew my days were numbered. There was no way he wasn’t going to be great."

Nicknamed the "Maestro of Mayhem," Butkus had the speed and agility to make tackles from sideline to sideline and to cover running backs and tight ends on pass plays. In his first game as a pro, he recorded 11 unassisted tackles.

As a rookie, he led the Bears in interceptions and opponents' fumbles recovered. In 1967, team statisticians reported that the one-man wrecking crew was involved in 867 of 880 defensive plays, leading the team with 111 solo tackles, 35 assists, and 18 quarterback sacks.

During his career, Butkus intercepted 22 passes and recovered 25 opponents' fumbles, an NFL record at the time of his retirement in 1973. In 1979, in his first year of eligibility, Butkus was accorded pro football's highest honor, election to the Pro Football Hall of Fame.