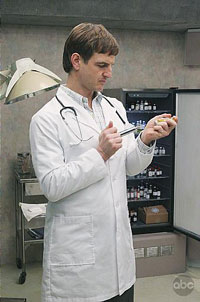 Where did all of these supplies go when the Others abandoned the medical station? Were they even there to begin with, or was Claire hallucinating?
Photo copyright © 2004 ABC, Inc. / Mario Perez

Plenty of armchair mad scientists have come up with theories about exactly what causes the strange happenings on the island and in the lives of the survivors before the crash. Whatever the mystery turns out to be, it's likely that the DHARMA Initiative will be involved in studying or causing the phenomena. Here are some of our favorite theories.

The black smoke monster seems to be sentient -- it could be a previously undiscovered form of intelligent life. It can read people's thoughts and display images from their pasts. It also behaves differently based on how people respond to it and whether they are a threat to the island. It seems to be intelligent or programmed to react in a specific way to certain stimuli. Maybe Television Without Pity recapper Dan Qua is right -- it's the Iron Giant, and he's decided that not being a gun is for saps.

Electromagnetic radiation (EM) powers everything from TVs to Magnetic Resonance Imaging machines. (It also powers Magnetic Resonance Imagining, according one survivor's flashbacks). Even visible light is part of the EM spectrum. The DHARMA Initiative supposedly built Station 3 to study strange electromagnetic fluctuations coming from part of the island. Electricity, static magnetic fields and various parts of the EM spectrum might explain:

Beaming Up: Worm Holes and Portals The island may be one of several "portals" that allow people to travel from place to place. Theories allude to the island's location in comparison to the Bermuda Triangle and other paranormal phenomena. This could explain:

Being the subjects of experiments could explain the Others' apparent cunning and stealth. Whether or not they are part of the DHARMA Initiative, they probably have a reason for abducting people from the island. It's possible that:

Read on for some of our other favorite theories.

Much of the available information about the DHARMA Initiative and Alvar Hanso comes from an orientation video. Doctor Marvin Candle narrates the video, and his lab coat and tie change during the film. The most logical explanation is that filming took place on more than one day. Something more sinister could be afoot. Dr. Candle's prosthetic left hand adds to people's suspicion. Some believe that Dr. Candle has a glass eye -- the same eye the survivors of Oceanic Flight 815 found in an abandoned bunker.