DHARMA on the Island 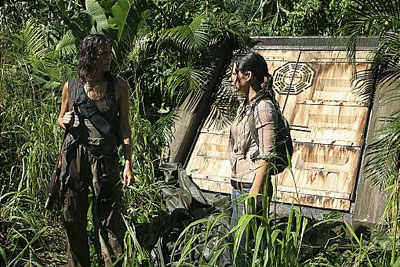 The survivors of Oceanic Flight 815 know very little about the DHARMA Initiative's activities on the island. They know only that they must enter the sequence 4, 8, 15, 16, 23, 42 into a computer every 108 minutes, ostensibly to prevent an unnamed disaster. A 540-day tour of duty at the station would involve pushing the button about 7,200 times.

This exercise appears to be part of a B.F. Skinner-style psychological experiment, originally observed from a central DHARMA Initiative station known as "The Pearl." However, it also appears that failing to enter the numeric sequence can have disastrous effects.

The DHARMA Initiative is secretive about its activities, but a drawing on the blast doors of Station 3 provides several clues about the facilities. You can see an annotated version of this map and the graffiti around it at Cubit.net.

Unlike the survivors of Oceanic Flight 815, the mapmakers took an interest in the DHARMA Initiative's facilities and activities on the island. The mapmakers explored the island systematically, making sure to travel only as far as the 108-minute limit would allow. In this way, the mapmakers could explore the island while still pressing the button. The mapmakers then manipulated the station's wiring to activate the blast doors, and they documented their discoveries there.

Two other bunkers, possibly located underwater, may also exist, in addition to the central station known as the Pearl. The Flight 815 survivors have seen a shark marked with a DHARMA logo and at least two polar bears on the island, making it likely that a full-scale animal research facility existed at some point.

An intranet, called Dharmatel, connects the compounds, although the mapmakers' notes detail system-wide outages on several dates. The notes also refer to Cerberus, named for the three-headed, mythological beast that guards the entrance to Hades. Cerberus is likely the island's "black smoke monster." Its purpose is unclear, although Danielle Rousseau has called it a security system. However, no one knows precisely what it protects and from whom, or whether it existed on the island before researchers arrived. Some speculate that the survivors of the tail section of Oceanic Flight 815 had increased encounters with the Others because Cerberus was not present on their side of the island.

The map also specifies the slave ship "Black Rock" as the final resting place of Magnus Hanso, likely either a relative of or a nickname for Alvar Hanso. Its notations suggest that the unspecified incident that led to the Station 3 button pushing took place in 1985. This incident probably involved Alvar Hanso and one or more of the DeGroots.

Of course, all of the facilities noted on the map may be part of a grand façade, an attempt to experiment on the researchers themselves rather than on their subjects. We have a few theories about what's going on, which we'll look at in the next few sections.

The Hansos Are Not What They Seem

The map on the blast door may remind people of the drawing found in Owl Cave in Twin Peaks, Washington. The Owl Cave drawing turned out to be a map to the entrance to the mystical Black Lodge in Glastonbury Grove. The circle of unknown territory in the center of the blast door map may have a similar purpose to the circle of sycamores that mark the entrance to the Lodge.

Several people in both locations also have a similarly odd manner of speech. While in the custody of the Others, Flight 815 survivor Walt Lloyd has appeared to speak normally, but witnesses have heard his voice in reverse. Entities in the Black Lodge, on the other hand, speak in reverse. Because of a phenomenon called phonetic reversal, witnesses see and hear these entities somewhat normally, although the process makes their speech and appearance quite eerie.