The Initiative and Eastern Spirituality 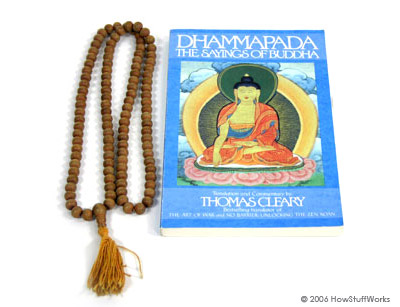 Eastern spirituality may have even made its way into the infamous series of numbers that appears in a range of contexts surrounding the Initiative. The numbers -- 4, 8, 15, 16, 23 and 42 -- add up to a total of 108. Two of the central tenets of Buddhism are the Four Noble Truths and the Eightfold path. The "Dhammapada," the collected writings of Buddha, has 423 verses. There are also 108 beads in a Hindu or Buddhist mala, or rosary, and 108 names for Hindu gods. Check out the sidebar on this page for other interpretations of the numbers.

It didn't take long for those numbers to start giving people the creeps. They've driven some people crazy, while cursing others. Along with multiple warnings about opening a box, their presence on the Station 3 hatch has led some people to believe that the station is evil.

The sequence 4, 8, 15, 16, 23 and 42 appears in full on the injectable substances used in Station 3 and the medical bunker. Numbers from it also appear often in the lives of the Flight 815 survivors before and after the crash. They have a mystical quality that cannot fully be explained, but they also have some interesting parallels:

It seems clear that Eastern spiritual practices, which generally promote nonviolence, simplicity and ethical behavior, are important to the DeGroots and the DHARMA Initiative. So why would such an organization align itself with a well-known arms dealer? There are two primary possibilities:

While the DHARMA Initiative's motives for building a research center on an island are unclear, as are its current activities there. But they have left a few clues. We'll look at those next.