The Name and Logo 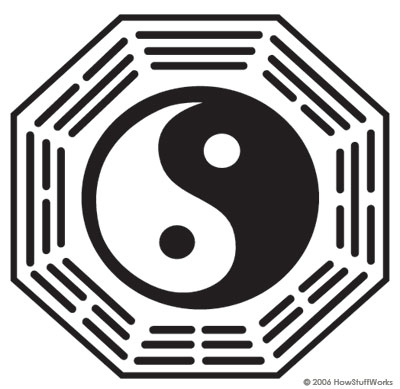 A bagua, the source of the DHARMA logo
© 2006 HowStuffWorks

Like many very old words, "dharma" has more than one definition. It's used in several Eastern religions, including Buddhism, Hinduism and Jainism. Its primary meaning relates to a person's duty or role in relation to the universe. It can also mean:

The DHARMA Initiative uses the word as an acronym. Although the Initiative has not publicly revealed what the letters mean, the first two likely stand for the names DeGroot and Hanso. The Initiative's use of the word suggests that its principles are based on Eastern spiritual practices. These practices generally promote nonviolence and ethical behavior.

The logo is a bagua, an octagonal symbol that incorporates symbols from Taoism and Confucianism. In a bagua, the eight trigrams of the "I Ching" surround a yin-yang. The yin-yang is a well-known Taoist symbol that represents change and balance. Trigrams are simply three-line combinations of whole and broken lines.

The "I Ching," also called "The Book of Changes," is an ancient Chinese text that interprets hexagrams, or pairs of trigrams. These interpretations are used for spiritual guidance and fortune telling, as well as in feng shui. There are eight possible trigrams and sixty-four possible hexagrams. You can learn more about the "I Ching" and hexagram interpretation by reading this online version of the text.

In addition, DHARMA Initiative communications often close with "namaste," a greeting used in Eastern cultures. Like "dharma," "namaste" can be difficult to define precisely. It generally means "I salute the divine within you." People say it, often making the accompanying mudra, or hand gesture, to show respect for elders or in the context of spiritual meetings or yoga practices.

Eastern spirituality may have even made its way into the infamous series of numbers that appears in a range of contexts surrounding the Initiative. The numbers -- 4, 8, 15, 16, 23 and 42 -- add up to a total of 108. Two of the central tenets of Buddhism are the Four Noble Truths and the Eightfold path. The "Dhammapada," the collected writings of Buddha, has 423 verses. There are also 108 beads in a Hindu or Buddhist mala, or rosary, and 108 names for Hindu gods. Check out the sidebar on this page for other interpretations of the numbers.

A Buddhist mala and the Dhammapada: 108 beads and 423 verses

It seems clear that Eastern spiritual practices, which generally promote nonviolence, simplicity and ethical behavior, are important to the DeGroots and the DHARMA Initiative. So why would such an organization align itself with a well-known arms dealer? There are two primary possibilities:

The DHARMA Initiative's motives for building a research center on an island are unclear, as are its current activities there. But they have left a few clues. We'll look at those next.

"Lost" seasons 1 and 2 spoilers within.