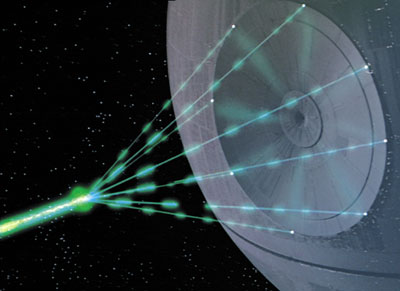 The main cannon and eight tributary lasers fire beams that converge at the outer perimeter of the Superlaser dish in an amplification nexus.
Photo courtesy © Lucasfilm Ltd. & TM. All Rights Reserved.

If you've ever burned a leaf with a magnifying glass you understand the basic principle behind the Superlaser. When a magnifying glass is held at the correct angle between the sun and a leaf, the sunrays are focused through the lens. These rays intersect under the lens and at the point of intersection a beam of heat is created that burns the leaf. The sun is the source of power and the lens is the focus.

The Death Star's Superlaser derives power directly from the hypermatter reactor. The lasers convert and focus the full power of the reactor to create the beams. So going back to our magnifying glass example, the Superlaser is like a series of large magnifying glasses focusing the entire power of the reactor (which is like a small sun) into one huge beam to destroy a planet, rather than a few rays of light to burn a leaf.